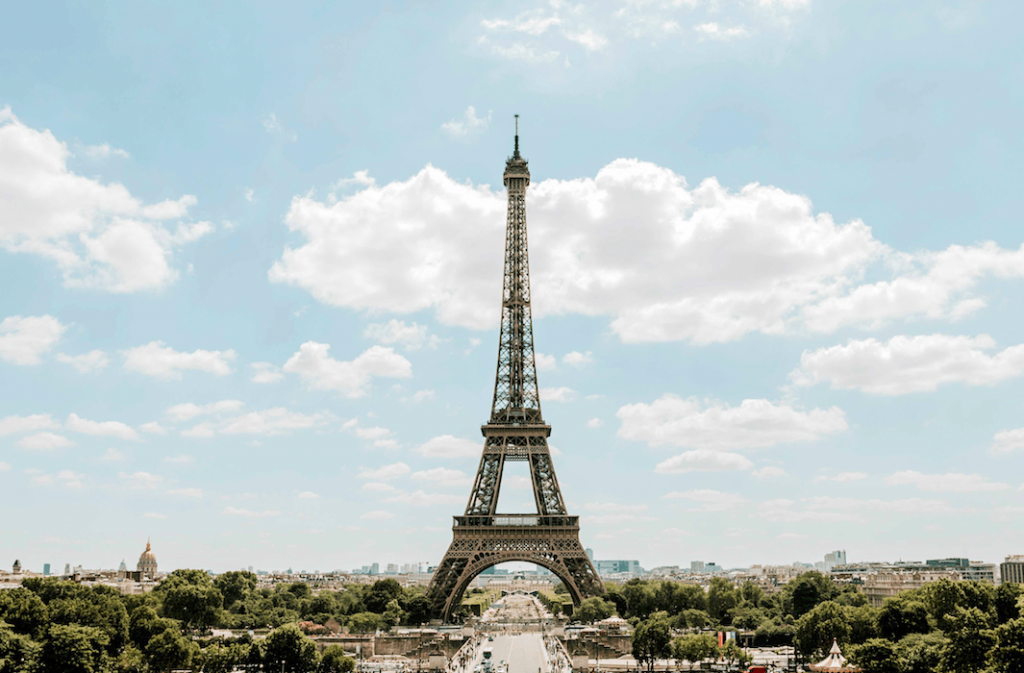 If you missed reading about my adventures at Notre Dame and the Louvre, be sure to catch up. 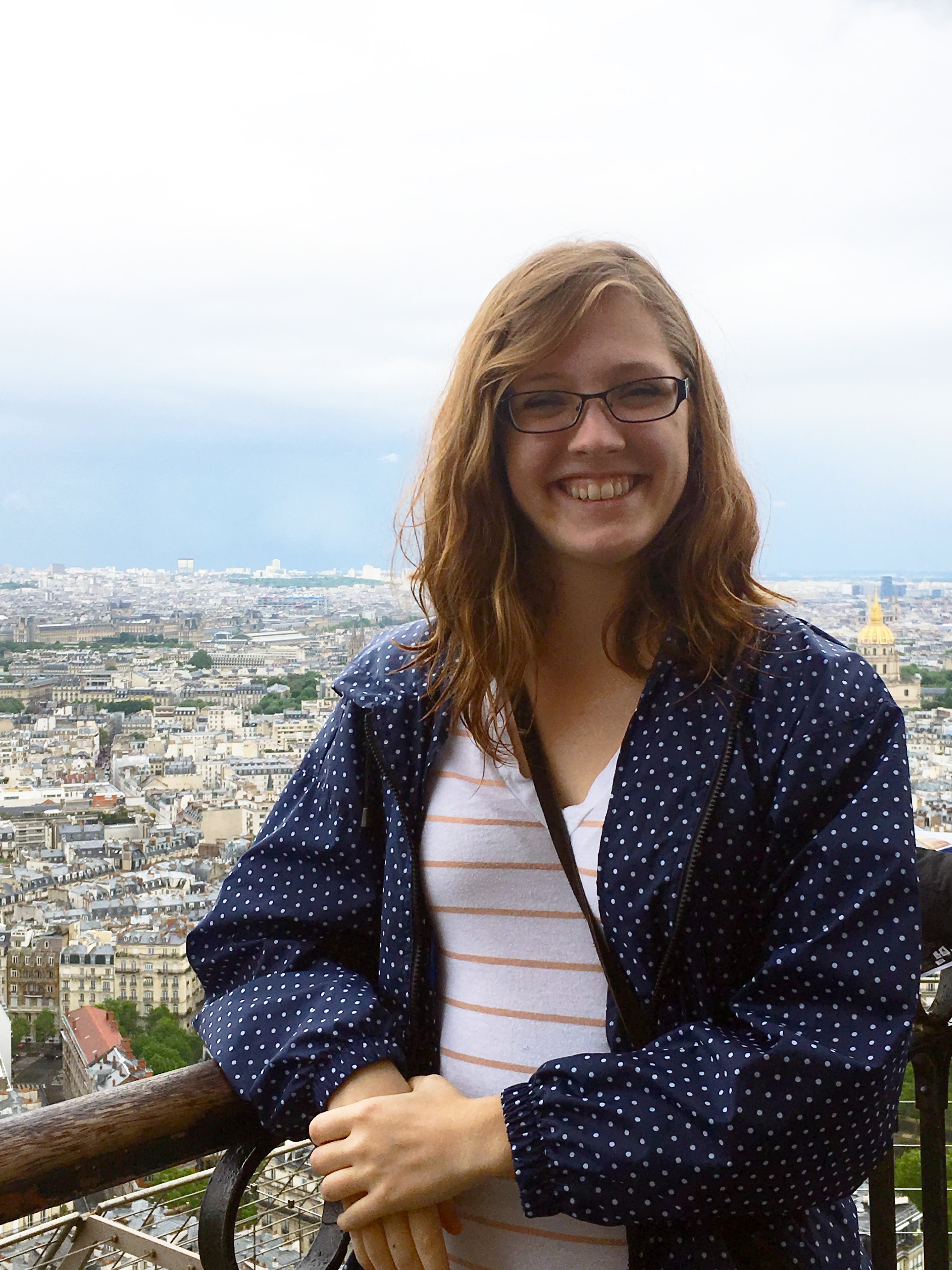 After visiting the Louvre, Nikos had invited the group to go with him to the Eiffel Tower. Afterward, he was going back to the hostel. I hadn’t completely gotten my groundings in Paris just yet and figured it would be easier to follow him back to the hostel for a quick nap rather than get lost in yet another foreign city (throwback to Getting Lost in London). Most of the group decided to find their own way, so the group that went to the Eiffel Tower was rather small. Dounia and I were accompanied by Rachel, Yennifer, and Allyson. We talked about what we thought of Paris so far as we stepped around rain puddles.

Up the Eiffel Tower 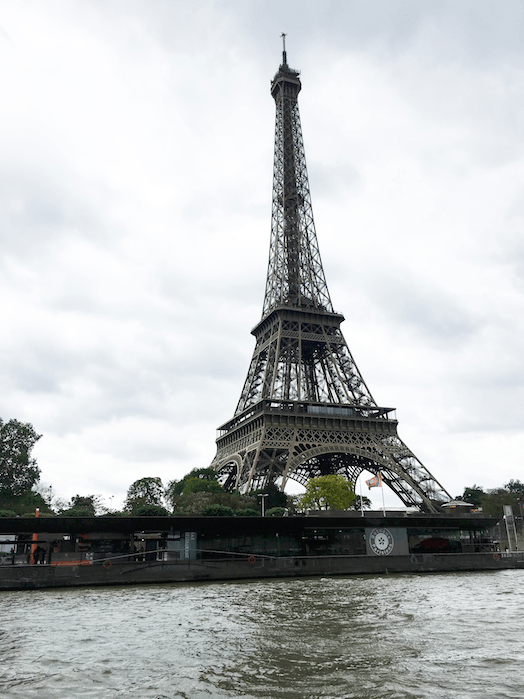 As we approached the Eiffel Tower, I tried to crane my neck up to see all the way to the top. Alas, I was only rewarded with rain drops in my eyeballs. Nikos handed each of us a complimentary ticket to the top. There were two ways to get to the top: elevator or stairs. Considering my lack of physical prowess, I decided to take the safe route and used the elevator. We waited in line for about 15 minutes and then piled into the elevator with a family from India. It must have been some kind of family reunion trip or something, because there were at least seventeen people in our elevator, and five more had been left behind! I peered over Dounia to look out the glass panes of the elevator as we rose diagonally (along the leg of the Eiffel Tower) all the way to the top.

The rain had turned into a slight mist and I stepped very carefully. I did not want to slip and fall that high up in the air! The elevator let us out near the center of the tower, and after meandering through some columns and dashing through crowds, we finally got to the edge. Paris was gorgeous from the air. I could easily see the wide avenues, as well as Paris’s famous gridded streets. Dounia and I took a ton of pictures and made sure to get one of ourselves (something we started to realize we had forgotten to do in London). We both looked pretty mediocre because we were essentially standing in a rain cloud, but they’re some of my favorite pictures.

After our initial visit, Dounia and I decided to go hunt for some macarons before dark. On our way down, we ran into Yennifer and Emily, who invited us to come with them and some others to see the Eiffel Tower again. We figured it was the perfect place to find some of Paris’s most popular treats and agreed. Everyone filed into the scenic subway train, which, at some point, made its way above ground for a sweeping view of the city. While everyone was chatting, I scanned my eyes across the Parisian sky, only to find a glittering Eiffel Tower! 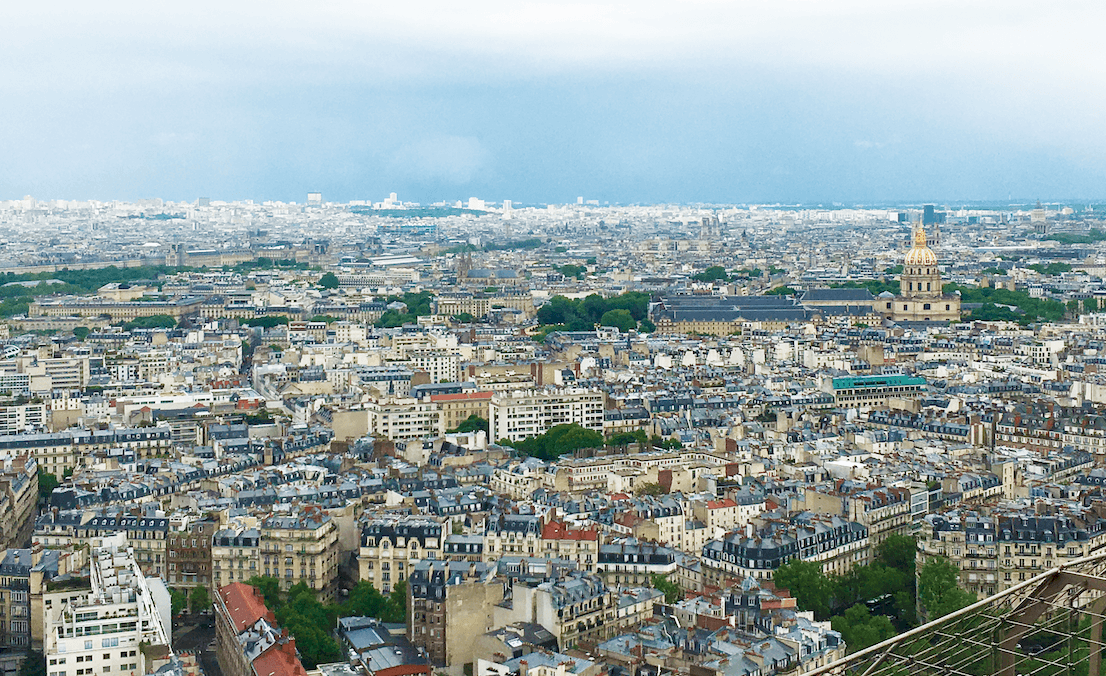 My jaw dropped. I could only manage to point and say, “whoooo!” As soon as everyone swiveled around to see what I had been looking at, they all yelped and leapt out of their seats. They clamored for their phones as they raced to press their faces to the window. I had never heard anyone actually “oooh” and “ahhh” before. Nonetheless, all eight of us were doing it that train ride! I heard some chuckling from the rest of the car and found the Parisians smiling and laughing at us. All we could do was laugh at ourselves, too! We all chided ourselves for being the dumb stereotypical tourists.

As the train passed the twinkling Eiffel Tower, I was left to wonder, why? Why hadn’t I heard that the Eiffel Tower sparkled? I decided that it must be some sort of celebration… although it was summer. I could only guess that maybe it was the Parisian’s independence day. Nonetheless, I was sure that it was a one-time event. As I gave the tower one last glance from the train window, I felt a soft sadness in my heart that I hadn’t been there to see it in person.

Crêpes Under the Eiffel Tower 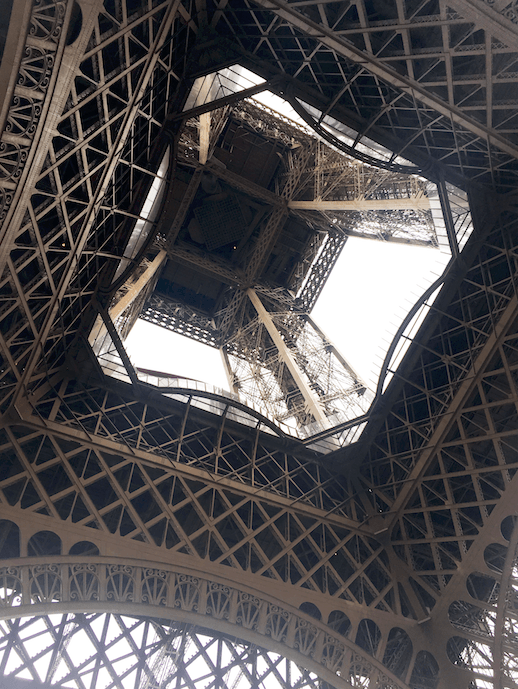 As we got off the train, we lost most of our group. They were going up to the top of the tower with their free tickets anyways. We didn’t think much of it. As we wandered around on the bottom, we ran into another group member, Rachel. We all decided to get crêpes from a nearby vendor as we waited for everyone, and Rachel found out that the glittering Eiffel Tower was a regular occurrence! She even found out the next time the tower would glitter that night. Luckily, it wasn’t that much longer to wait. We settled into the grassy field to the south of the tower to eat our strawberry Nutella crêpes (delicious and pricey) and to wait for the show. Champagne vendors wandered through the seated crowds trying to sell to couples and groups of friends.

A Chance for Reflection

Right on cue, the Eiffel Tower lit up again. As it sparkled in the night sky, I was so glad that I had the chance to see it in person. I would have completely missed out on this experience if it hadn’t been for running into a series of people all night. I couldn’t help but to think of how coincidental life was. Paris was both a low point and a turning point for me. During the first few days in Paris, I felt overwhelmed and really alone. I thought that I may have made a mistake in signing up for such a long trip. I even called my mom on our first night in Paris in the hostel’s basement. She yelled at me about burning international minutes and how I shouldn’t overthink things. 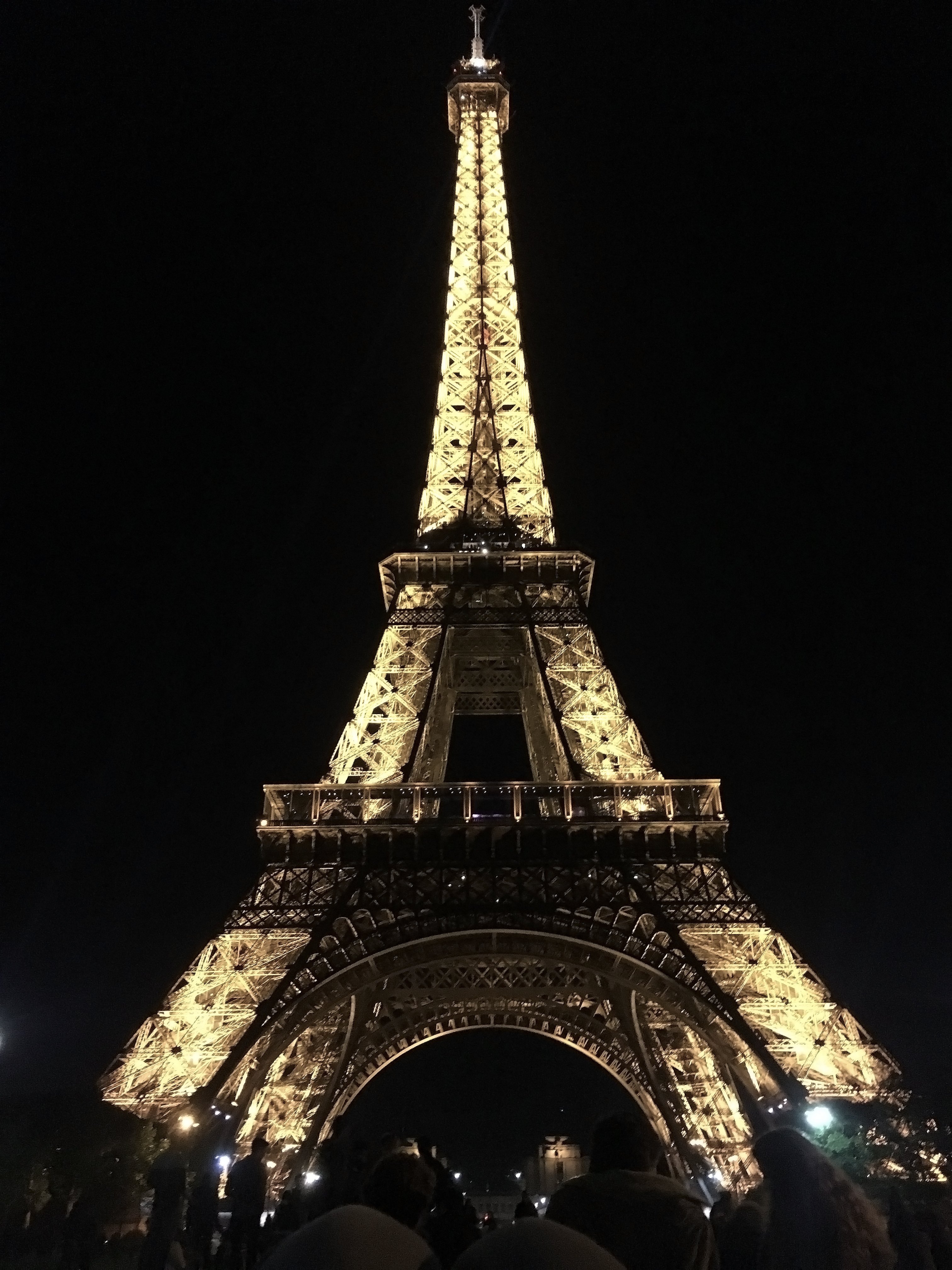 As I looked up at the twinkling Eiffel Tower, I knew that everything was going to be okay. I had made friends with people in our group. Luckily, I had officially managed to converse with Parisians in a way that made them not hate me. I could get around a big city by myself and not get lost. I even entrusted Dounia with the task of cutting my bangs in our hostel’s bathroom (she did a great job, but it took a solid ten minutes of me squealing with anxiety before she could start). That night, at the base of the Eiffel Tower, I realized that I hadn’t really done anything on my own since moving away to college. It was right there that I felt like I had finally started to grow up a little more.

Join me next time for Amsterdam, the Netherlands! 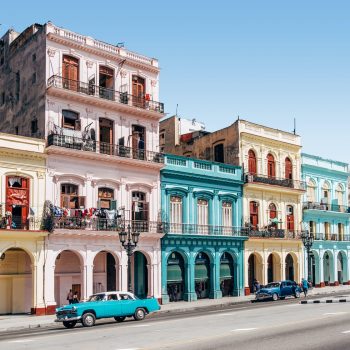 Reasons Why I Love Havana, Cuba

October 20, 2020
By Michael Carter When was the last time you jumped into a 1957 Thunderbird taxi at an airport? You can…
Read More How Did I Get to Thailand to Teach?

October 7, 2019
by Emma Higgins When you first hear about Thailand, you probably picture the flowy elephant pants, Leonardo Dicaprio in “The…
Read More 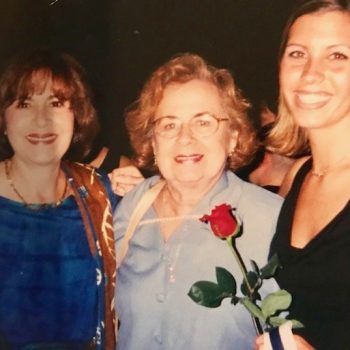