My Excursion to the Teotihuacán Pyramids

This is part three of my Mexico City series. Check out parts one and two!

My first two days in Mexico City were fascinating! I was able to see and learn so much about this humongous and vivacious city. But now it was time to get out of town and discover something of Mexico’s ancient past at the Teotihuacán pyramids. And what I found was more incredible than I was expecting!

I was up at the crack of dawn Monday morning ready for my first excursion of the trip: Teotihuacan. This tour was operated by Amigo Tours, one of the best tour companies in Mexico. I highly recommend them! They picked up a bunch of us outside of Hostal Amigo, which was thankfully only a couple of blocks from my hostel, Casa Pepe. The only downside I noticed about the touring company, though, was how many people they tried to stuff onto the tour bus. Finding a place to sit was almost impossible. Some people had their belongings on open seats and were reluctant to move them. Being able to speak Spanish, I was fortunate enough to convince one guy to move his stuff for me, however, other people weren’t so lucky.

We set off on our hour-and-a-half ride, only stopping once at a gas station along the way for some breakfast and water. Along the way, our guides Leonardo and Tito explained how the tour was going to go and what we should expect. They spoke English really well so it was easy to follow along. As we pulled up to the site, I immediately noticed hot air balloons hovering around. I became really envious of the people who were able to get a view of the pyramids while enjoying the sunrise. If I ever go back, that’s exactly what I’m doing for sure.

After we stepped off the bus, they split us into English and Spanish speakers. We shuffled through the entrance to get to the site. Along the way, store owners were trying to get us to buy sombreros from their shops at the main entrance. What’s up with all these hat salesmen in Mexico? Do you think I bought one? No. Should I have? Absolutely. This would be the second day in a row I’d have the sun beating on my face. This was my second chance to save myself from embarrassment and I blew it. 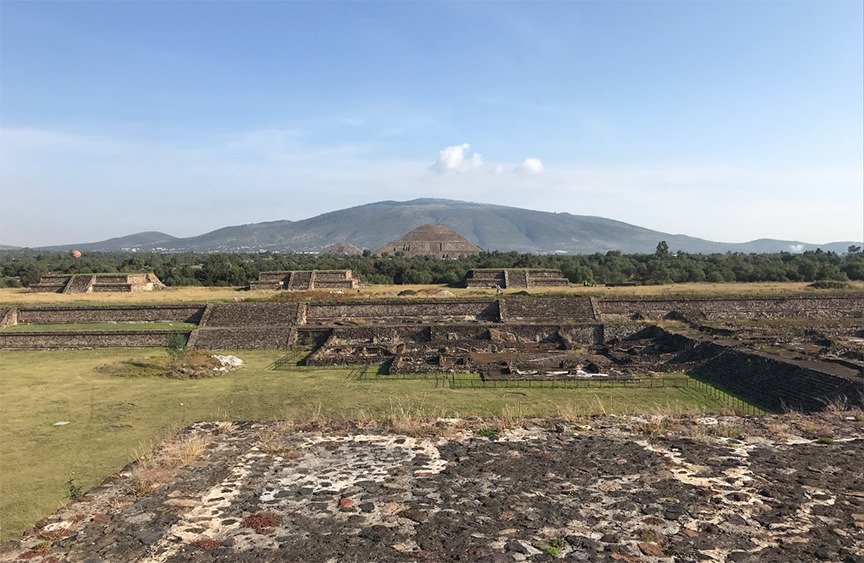 Anyway, we made our way into the absolutely enormous site. We could barely make out the sun and moon pyramids in the distance. I was already dreading the walk there. Before checking out some of the smaller pyramids near the entrance, our guide, Leonardo, took a couple of minutes to explain the region to us. I learned something right out the gate. An unknown Mesoamerican civilization settled these lands; one that predated the Aztecs. I was unaware of that. I always thought that the Aztecs constructed these pyramids. It was an interesting tidbit to start the tour.

Leonardo took us to the first pyramid, which was much smaller than the sun and moon pyramids. It was just a warm-up for what was about to come. We all climbed the stairs to the top and enjoyed our first nice view of the morning. And when I say climbed, I literally mean climbed. The stairs were practically vertical and only like four inches deep. My giant men’s-size-13 feet barely fit on each step. I had to scale the pyramid sideways. Luckily, I didn’t take a tumble. After taking some pictures, we descended the other side of the pyramid.  Fortunately, there weren’t as many steps because another pyramid was connected to this one. We were all able to sit while Leonardo explained more about the structures and their designs. This new pyramid, the Temple of the Feathered Serpent, was very impressive to look at as it had giant stone jaguar heads and stone serpents scattered about the facade. During its creation, the Mesoamericans decorated the pyramid in reds and blues, possibly symbols of war. Unfortunately, over time, the paint faded due to the elements. Leonardo also explained that there were many smaller temples within this one, kind of like a Russian matryoshka doll. It was crazy to think about how this primitive civilization was able to construct such complex structures. I can’t even build a bookshelf from Ikea.

We then started the long walk towards the sun and moon pyramids. Along the way, we passed some vendors selling some really cool trinkets like jaguar and eagle whistles. The eagle whistle actually caught my interest because it was so loud and sounded so real. I didn’t buy one in Teotihuacan unfortunately, but I did find one in Mexico City a few days later. As we continued along the dirt path, Leonardo continued to explain more about the region. However, I was too mesmerized by the mountainous landscape surrounding us to really pay any attention to him. 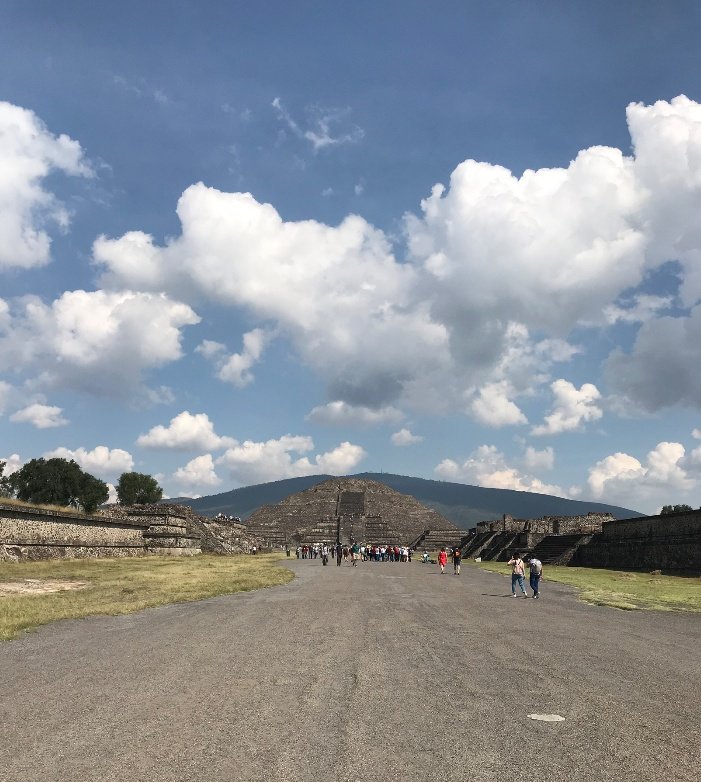 After what seemed like a marathon and a half, we finally reached the largest of the pyramids, the sun pyramid. And boy was it an impressive sight. I felt like a tiny ant standing next to this gigantic structure. Leo gave us about an hour to climb to the top so I hastily made my way up these, once again, steep, narrow stairs. Thankfully, there were stops along the climb to rest because only an Olympic mountain climber could tackle these bad boys in one fell swoop. Eventually, I made it to the top and I met a jaw-dropping view of the entire region. And a dog. How a dog got up there, I’ll never understand. I continue to believe it was a Mesoamerican ghost dog because no normal hound would ever consider taking that vertical journey.

I sat along the edge of the sun pyramid for a good forty minutes taking in all the sights and imagining what the civilization must have looked like at its peak. The moon pyramid was easily visible in the distance and I was looking forward to checking it out next. After being harassed by that damn ghost dog, I made my way back down the pyramid. This time, it was significantly more difficult than going up since my legs were now Jell-o. Plus I’m tall and clumsy. But alas, I survived again and headed over to the moon pyramid with the group. 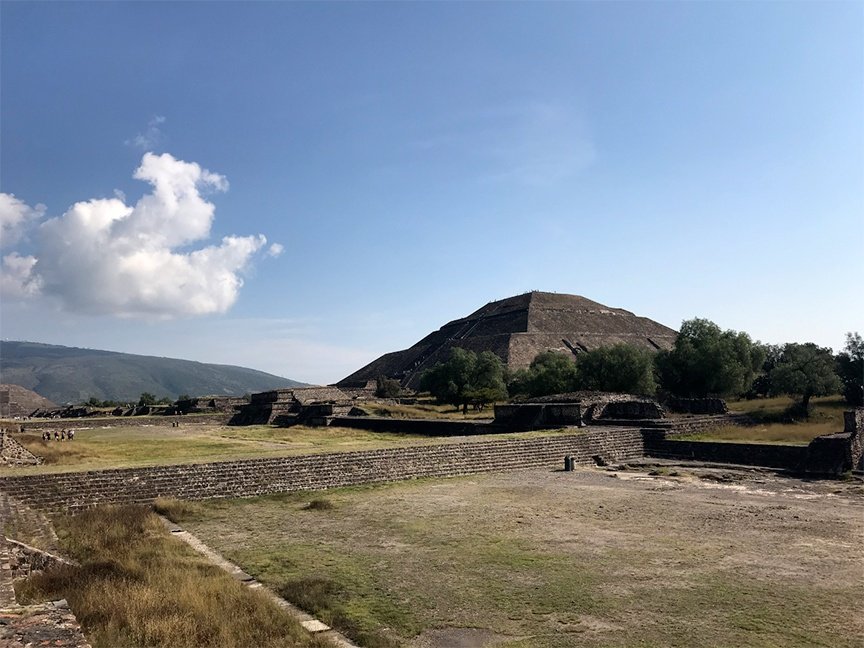 Along the way, we passed some structures that had paintings still preserved from the mesoamerican tribe while at the Teotihuacán pyramids. The most prominent piece was that of a jaguar. It made me wonder if jaguars were common in the area and if I should be concerned or not. We finally reached the moon pyramid and marched up the stairs again. Luckily this pyramid was a lot smaller than the sun pyramid so I didn’t struggle too much. At the top, I was met with one of the most beautiful views I’ve ever witnessed. One thing that fascinated me was how the edge of the sun pyramid mirrored the silhouette of the mountains in the distance!

Thank you for reading part three of my trip to Mexico City! Stay tuned for part four where I hike the dormant Iztaccihuatl volcano. 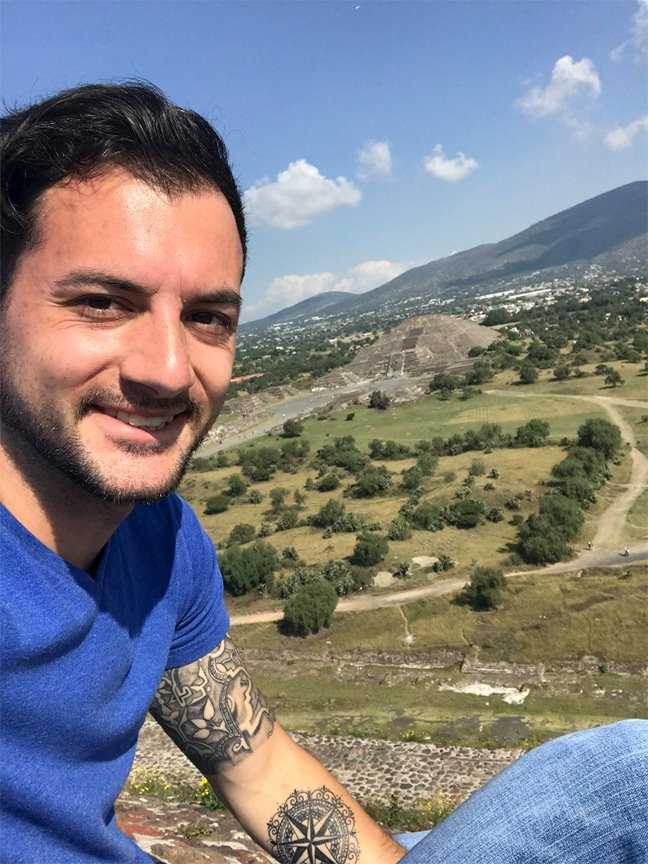 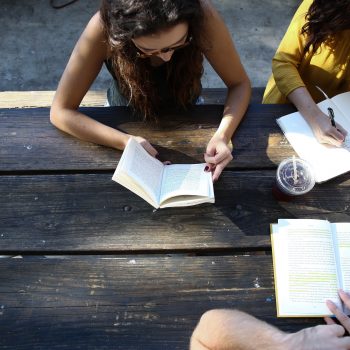 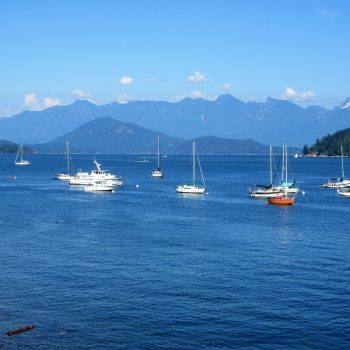 October 12, 2021
In Part Two of my article on Canada’s West Coast, Cathryn and I explore what’s known as the Sunshine Coast in…
Read More 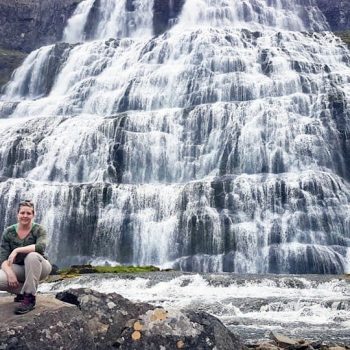 September 17, 2019
I know that I say this a lot, but I really liked insert name of place here and would definitely…
Read More