I hate it when someone asks me to name the one favorite place I’ve visited. It’s one of my personal quirks: I don’t do favorites, whether it’s colors, cars, or cartoons. That’s just me. Having said that, it doesn’t mean I don’t have a list of favorite places. The ruin sites at Angkor Wat, for example, will always have a front-row seat in my memory bank.

Anger What? You ask. It’s a place that many have never heard of, most likely because it’s in Cambodia, a country that’s mostly ignored by the average tourist. As it happens, I have a friend who moved there to teach English, and knowing that we share an affliction of wanderlust, he suggested that I come to visit his side of the world.

Largest Religious Monument in the World

If you enjoy seeing ancient ruins sites as much as I do, then you must visit Angkor Wat. The Buddhist temple complex is the largest religious monument in the world. Originally constructed as a Hindu temple dedicated to the God Vishnu, it was built for Khmer King Suryavarman early in the 12th century.  The modern name, Angkor Wat, means Temple City. Or, if broken down, Capitol City and Temple Grounds.

The name Angkor Wat is used to describe the largest and best-preserved temple but it can also include Angkor Thom and Bayon, which are equally impressive sites. Too numerous to mention, there are several more temples in the area. Each successive king took it upon himself to outdo his predecessors by going bigger and better. The three major sites can be taken over a two-day leisurely tour. It can be done in one day if you want a kamikaze experience.

Thailand and Vietnam may see more tourists than neighboring Cambodia, but it is by far the cheapest of the three Southeast Asian countries. Beers can still be found for a buck and meals for under five. Despite it being cheap, don’t fear the cuisine. Meats and vegetables are always fresh and flavored with an amazing array of spices. It was there that I learned about all the different colors and varieties of curry.

Accommodations in the capital city of Phnom Penh and Siem Reap,  the nearest city to the ruins, can be found at a fraction of the cost of any American city’s best nightly price. The bus fare from the capital to Siem Reap was a pittance, and a tuk-tuk driver for the day is $15 to $20. To understand and appreciate the ruins, a good tour guide costs about $60 for the day. Some drivers and guides will negotiate their prices if things are slow.

Religion and History of Angkor Wat

I don’t follow any particular religion, but I was intrigued by how the Hindus converted to Buddhism. Like other Muslim/Christian sites around the world, the conversion is evident in the artwork and facades of their temples and buildings. The three-mile perimeter and sheer size of the monument is mind-boggling. The whole site is surrounded by a moat, making it seem even cooler. Modern-day Khmer Monks in orange robes can be seen wandering or praying within the temple walls. 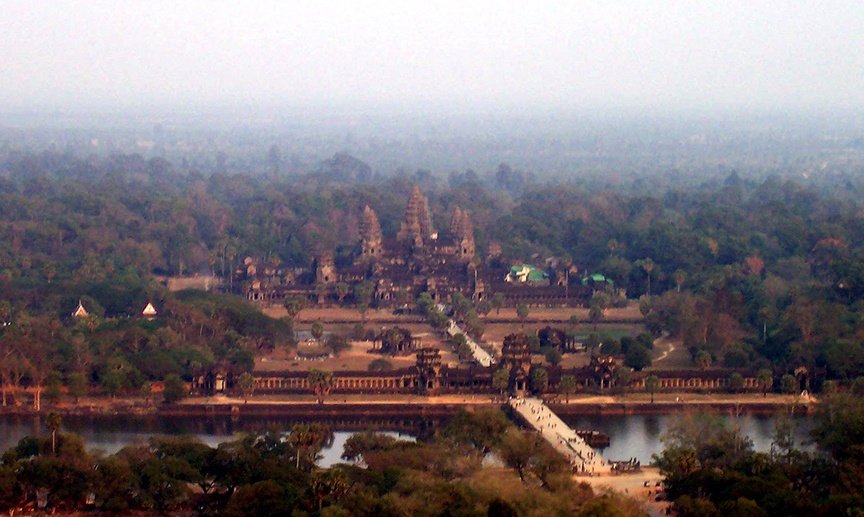 I’ve visited the pyramids and temples in Egypt and ruin sites in Mexico and Guatemala, but the ancient temples at Angkor Wat are truly unique. Khmer architects used sandstone to cover the facades of their temples, a material that they masterfully carved. At Angkor Thom and Bayon, giant faces adorn the entrance to the temples.

Like Egyptian hieroglyphs, scenes depicting important events or everyday life are carved into virtually every surface throughout the complex. The massive blocks that form the walls in the structure are so tightly fitted that some seams are difficult to locate. The ravages of time, jungle, earthquakes, and war took their toll on the Angkor ruin sites, but meticulous restoration has brought them back to life.

If you haven’t seen Angelina Jolie’s movie, Tomb Raider, give it a watch. Much of it was filmed in and around the jungles and ruin sites at Angkor Wat, and more specifically at Ta Prohm. There is no other place like it on earth. Giant silk-cotton trees have rooted themselves between the giant building blocks, giving the temple an eerie appearance. In some cases, tree roots look like giant hands grasping stones the size of small cars.

Jolie’s film crew frequented a restaurant called The Red Piano while they filmed on location. When I visited the eatery, they had her table roped off as a tourist attraction. The walls surrounding the booth were lined with autographed photos of her and the locals. She took a shine to the poor and orphaned children while she was there. There is nothing else to really see in the city, as it is basically a bedroom community for the ruins.

Like many other touristy sites, it is best to get there early. My guide suggested using the rear exit to start my tour. It was a great move; I got excellent unobstructed photographs and didn’t bump into other tourists until later in the day. For an overall and excellent view of Angkor Wat, try going up in the hot air balloon. It sounds tacky but you won’t be disappointed. I certainly wasn’t. 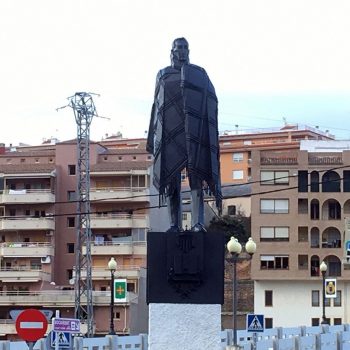 January 23, 2019
Without a doubt, the process of getting “settled in” to my little town was the most stressful portion of my…
Read More February 25, 2021
Who is Caroline Hazelton? Ever since I met Caroline, she has evolved into much more than just a great teacher.…
Read More