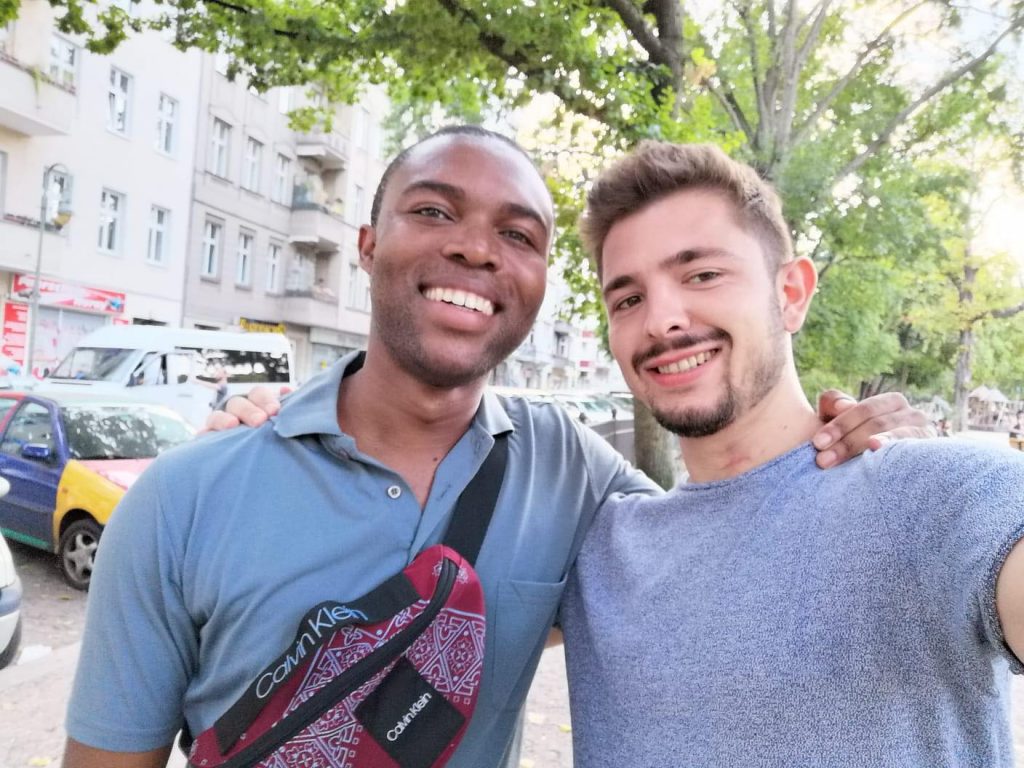 Getting a Master’s Degree Abroad 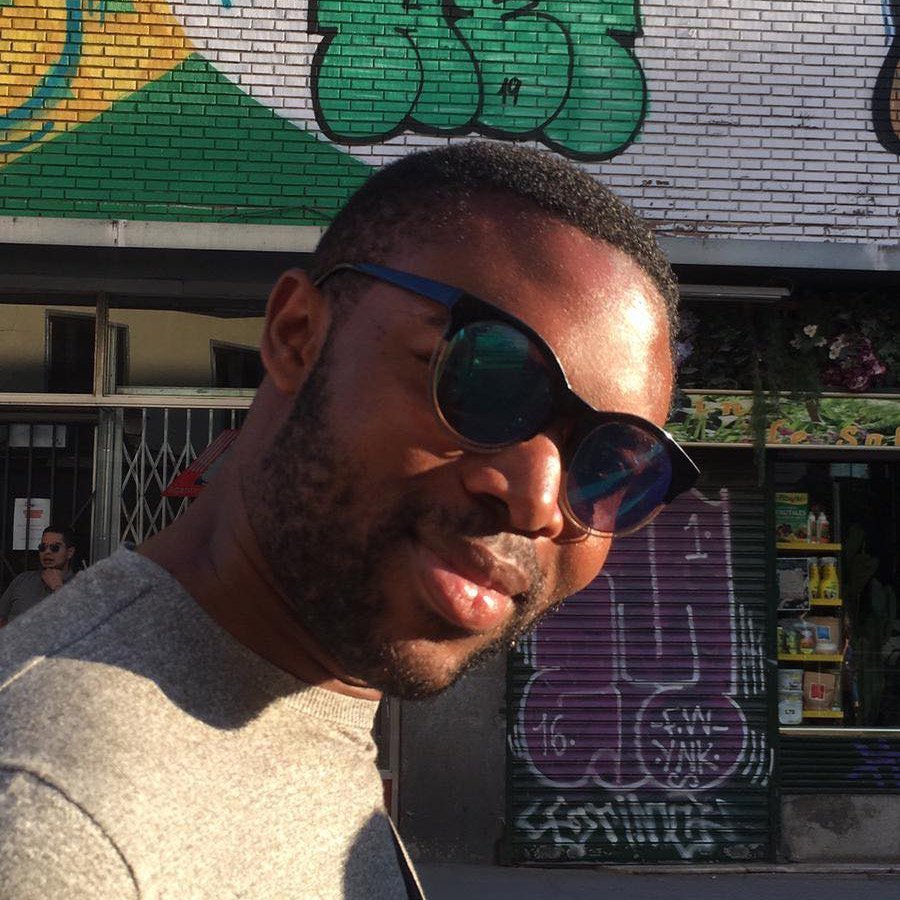 Kenny Obiora was born in Onitsha, Anambra State, Nigeria, Africa. He lived the majority of his formative years living with his uncle, aunt, and grandmother in Nigeria while attending school. He returned to the US during his school breaks before moving permanently to the United States for grades 8-12.

When I asked Kenny about his parents’ decision to send him “home,” he answered, “they wanted me to have a good upbringing.” He later explained that this meant that his parents wanted him to be culturally immersed in his day-to-day activities and life. They wanted him to be part of the Igbo tribe and learn the Igbo tribal language. Kenny speaks three languages: English (which is the dominant language in Nigeria), his tribal language, Igbo, and French, which he studied throughout his academic career.

Kenny is currently living in Paris, France on an APS visa. This visa class means that Kenny will have to work in a field in which he studied. Kenny recently graduated, getting a master’s degree abroad in health economics and is pursuing a career in the field.

What was it like growing up in Milwaukee, WI? For example, your education system. Did you go to a primary school and a secondary school?

“I had a mixed childhood. Before I was fourteen, I lived in Onitsha, Anambra State, Nigeria. I attended a private boarding school. I returned to the United States officially to complete eighth grade and high school. When I arrived, I attended a public middle school in a suburb of Milwaukee, and then a private high school in Milwaukee.

The education system in Milwaukee is very broken. Most of the public schools are lacking — whether in quality teachers or in funding. Due to this, students are negatively impacted. My parents enrolled me in a program in Milwaukee called “Open Enrollment” which allowed me to be bussed into another school district. This program was only by application and there were selective spots. I was only able to finish middle school through the program. Afterwards, my parents decided to place me in a private high school.” 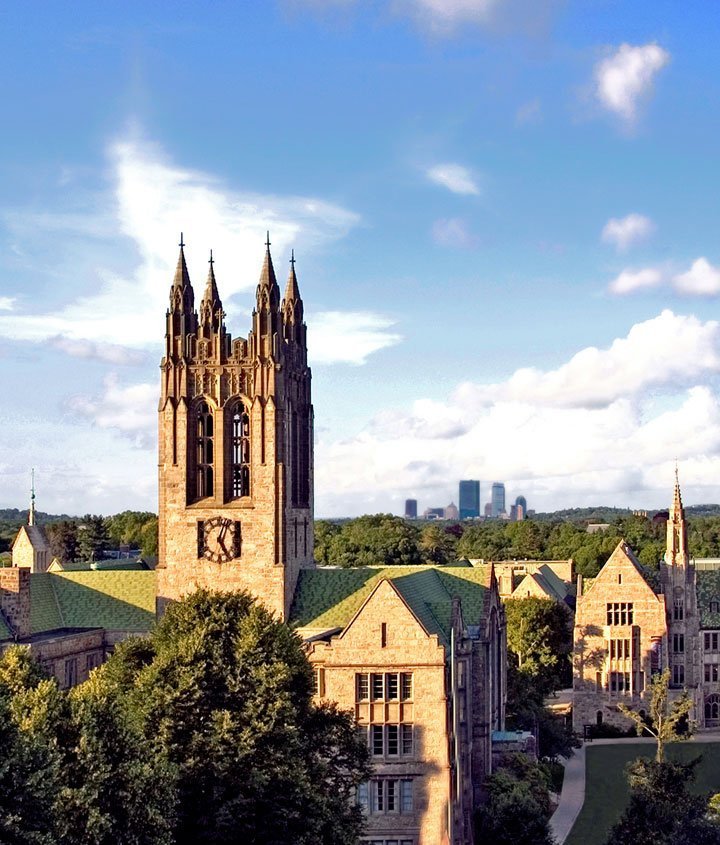 Did you take a gap year? Or, did you go straight to the university for your undergraduate studies?

“No, I went directly to the university. I was fortunate to attend a college-preparatory high school, which pushed us to apply to a wide range of universities. I was most looking forward to the exciting majors and clubs at Boston College.”

Where did you study after high school? How long did it take to get a diploma for your undergraduate studies?

“I attended Boston College (BC) in Chestnut Hill, MA. It’s funny that BC is neither in Boston nor a college! It took me four years to receive my diploma. I received a B.S. in Biology and a minor in French. College changed me in many ways. I learned independence and what it meant to do things for myself. Laundry was no joke!”

Why did you decide on getting a master’s degree abroad at Sciences Po Paris ?

“I decided to leave the United States and move to France for a few reasons. After I graduated from college, I spent a year working part-time in a lab in the Boston area doing clinical research and working part-time as a Resident Director and Diversity and Inclusion Assistant Director at Emmanuel College. My goal was to apply to medical school during this time. However, after I was accepted officially to Sciences Po Paris, I knew this was an opportunity of a lifetime. I hadn’t studied abroad during my college years, and I knew that getting a master’s degree abroad in Health Economics would be a complement to my bachelor’s studies. The price point of a university in France was also very attractive. With all these decisions I decided to pack up and head to France!”

What sparked your dream study abroad? 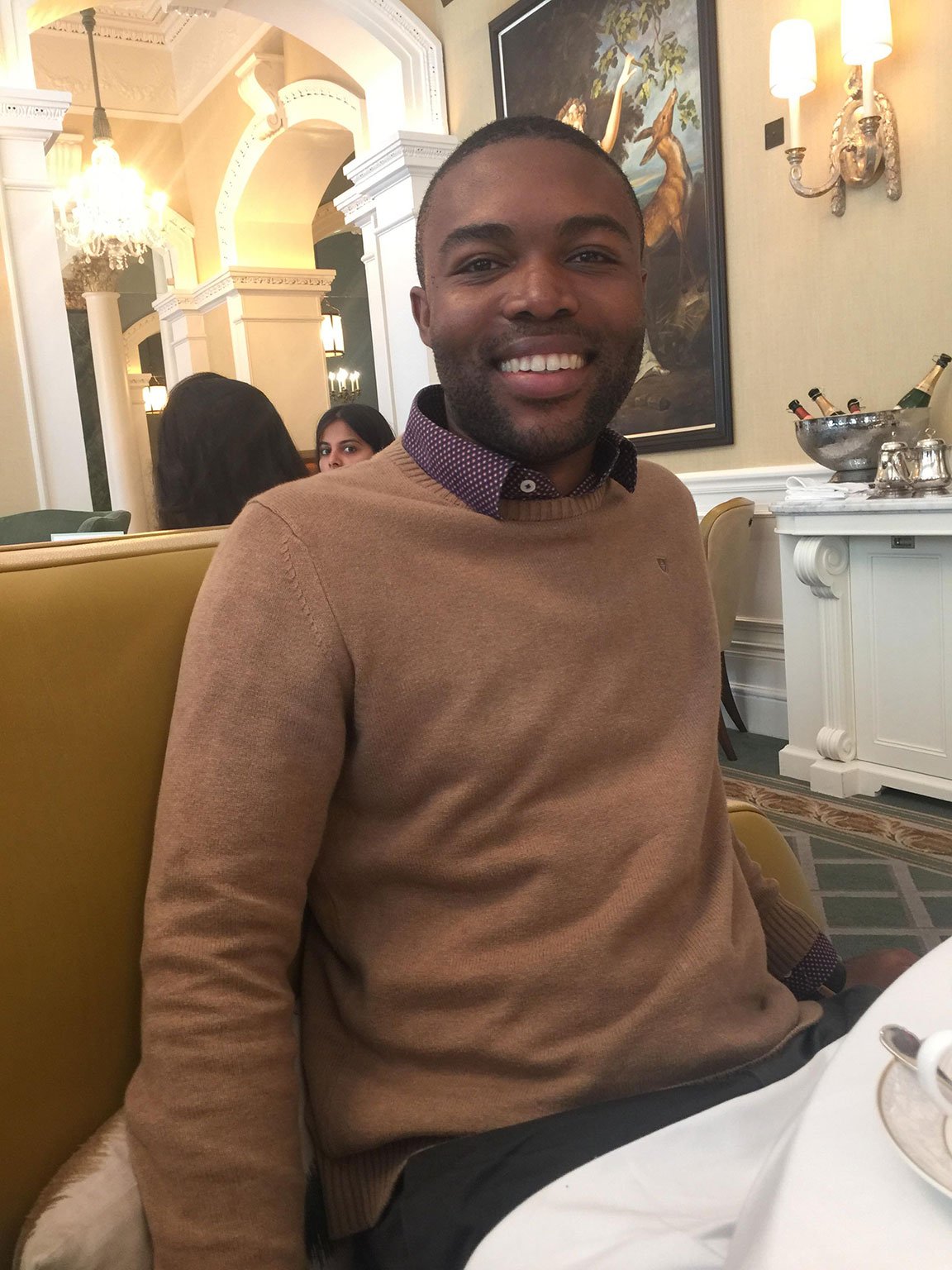 “I’ve always considered myself to be a wanderer. I spent many years of my childhood in Nigeria. When I didn’t have the opportunity to study abroad as a university student, I knew that getting a master’s degree abroad was a priority. Studies in France are very attractive. For example, schools are much cheaper than they are in the United States and there are many opportunities to do dual programs in other countries.”

What were your expectations before you left? How did they change once you arrived to the   location and what changed after having completed the program?

“I was an International Assistant at Boston College, which was a program that paired together international students and BC students to make the transition smoother. I was paired with a few French students. To be honest, they tended to stick with their friends from their country and thus, I thought the French would be exclusive. While this was somewhat true at the beginning, I did learn that the French value friendship a lot. While they can be closed-off at the beginning, once they opened up, they were very kind.

I also didn’t expect the amount of bureaucracy in France. I was so used to the efficiency of the United States. You applied for something and you could receive that service in a short period. This doesn’t happen in France. Everything takes so much time to happen and is very difficult for foreigners. Getting an apartment, healthcare, a bank account, and visa are all long processes that took weeks to months.”

What did you not expect about living abroad and getting a master’s degree abroad in Paris?

“I expected that university life would be similar to how it was in the states. You live and learn in the same environment. I was expecting that I would have classes right next to where I lived and wouldn’t have to rely on public transportation. In Paris, the school was just for studying. Clubs and student residences were far and many students lived on their own in the city. In my first year of working on my master’s degree, I lived in a flatshare thirty minutes from school.”

What have you done since you got your graduate degree?

“I am currently looking for a job in my field in Paris. Also, I have been keeping busy giving English lessons to families and companies in the Paris area. I have been applying to pharmaceutical companies in the Paris area in hopes of working in the healthcare field. Since graduation, I’ve been involved in acting classes in Paris. It’s a fun outlet to express myself and meet other expats and students with similar interests in Paris.”

What advice would you give to someone who wants to study abroad in Paris?

“I would tell them to go beyond a semester study abroad program. A full bachelor’s or master’s degree would not only be enriching, but it would save them a lot of money and really allow them to immerse themselves in the culture! Getting a master’s degree abroad really changed my life.” 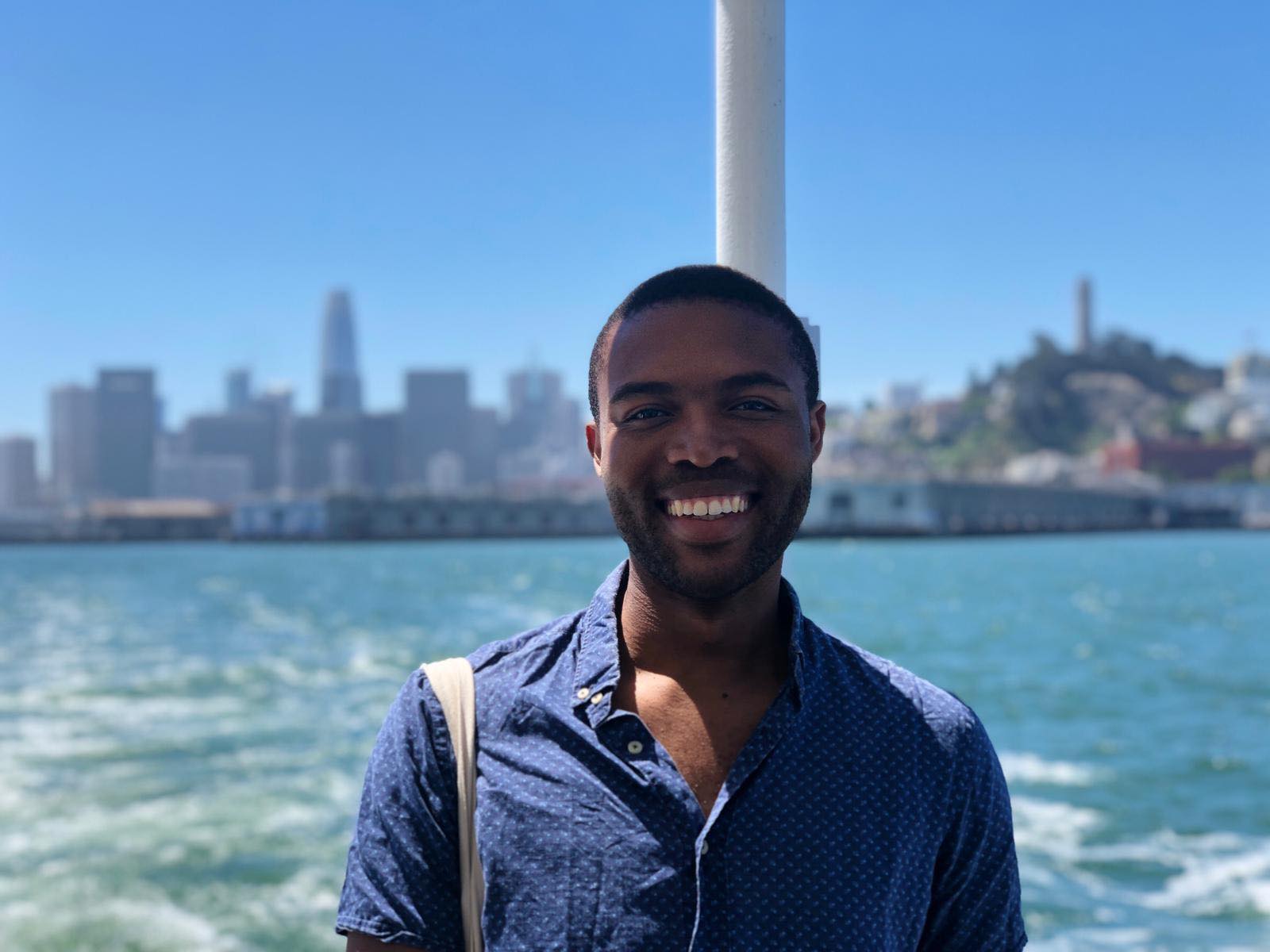 Starting a Professional Career After Getting a Master’s Degree

Kenny is actively looking for a professional career in Paris in the healthcare field. While looking for this position, he has experienced firsthand how competitive it is in his field. He has also realized how being from a different cultural background has its disadvantages. In this field (Kenny can’t speak for other industries), he has noticed that Parisians tend to work amongst themselves and often exclude outsiders. This isn’t just because of the need for a visa. It’s also a cultural familiarity amongst workers. Parisians tend to prefer working with other Parisians in big pharmaceutical companies in the Paris metropolitan area. Kenny just started interviewing and is teaching private English lessons at his college for extra money. His life is thriving at the moment, and he hopes to break through the cultural barrier during an interview soon. 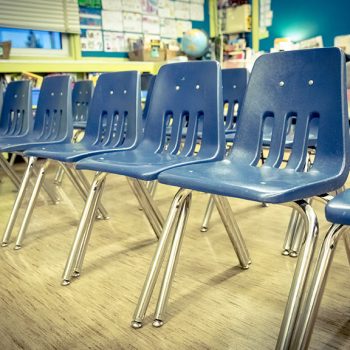 June 18, 2020
by Leesa Truesdell In our previous interview, Stephanie Vargas spoke about her school and what it was like to be…
Read More October 16, 2017
by Leesa Truesdell Erin decided to follow her dreams and move back to Europe. She studied abroad for a semester…
Read More 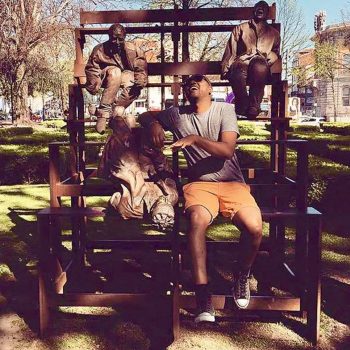 August 14, 2017
We asked Dreams Abroad Members what they would do differently if they were just starting out. This, we thought, would…
Read More