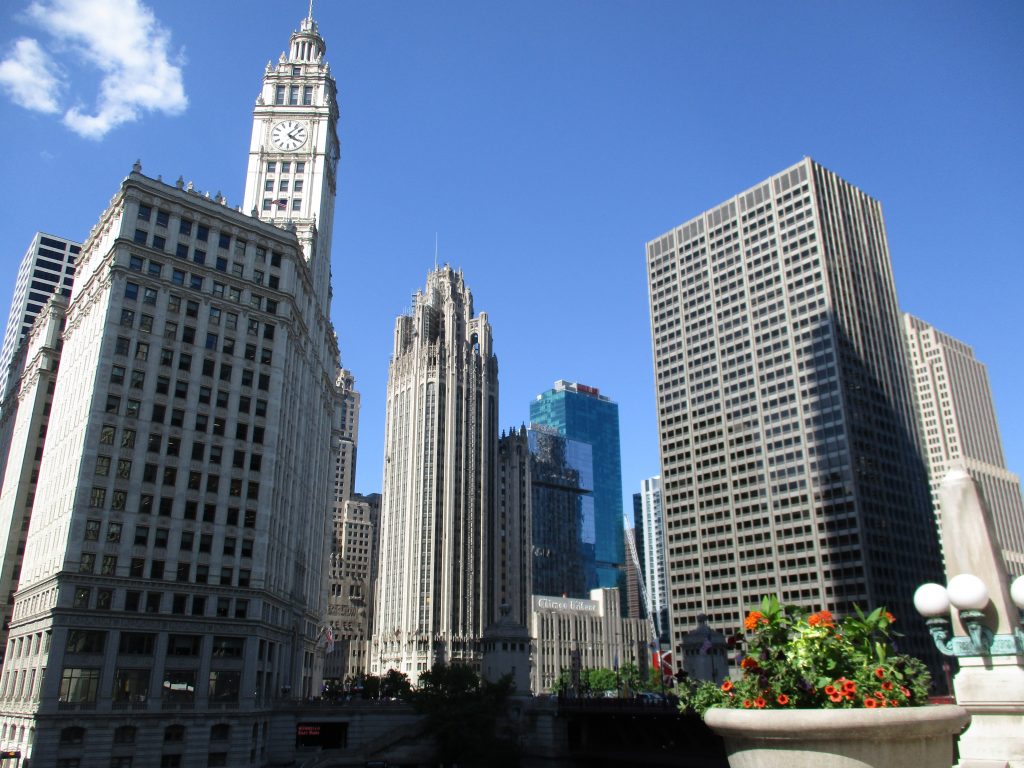 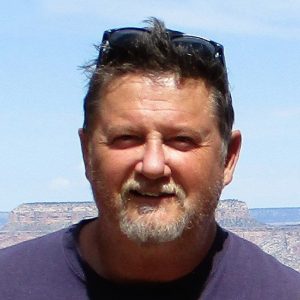 Chicago, the windy city. Once called the Second City, Chicago is now the third-largest city in the US after New York and Los Angeles. Sitting on the southwest shore of Lake Michigan, in the State of Illinois, Chicago is known for Al Capone, The Blues Brothers, being the starting point of Route 66, and great sports teams like the Bulls, Bears, and Blackhawks. The city likes its B’s. With plenty of things to do in Chicago, here are just a handful:

Take a Walk in Millennium Park

With 24 public beaches, numerous parks, and plenty of attractions along Chicago’s 26-mile waterfront, you could spend all your time exploring that area alone. At 25 acres, Millennium Park is a huge green space that contains concert areas, manicured gardens, rock climbing, sculptures, and the famous Buckingham Fountain, featured in the opening credits of the TV sitcom, Married With Children.

Between my wife and I, we’ve been to Chicago a half dozen times, taking in different sites each visit. We’ve found a huge variety of things to do in Chicago. On our last trip, we entered the park via the Cloud Gate, across Lakeshore Drive and the official starting point of the famous Route 66. There are bicycles to rent if you don’t think you can take in all the sites on foot. The Cloud Gate, better known as Chicago’s Bean, is a mirrored kidney bean-shaped piece of unique art. 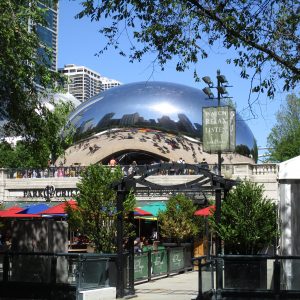 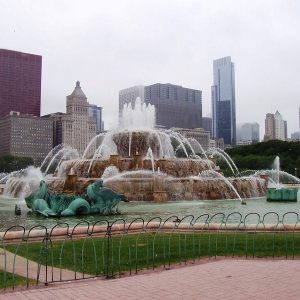 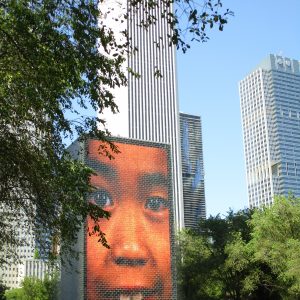 Near The Bean is the Crown Fountain, a black granite reflecting pool, situated between two glass brick towers that overlook the water feature and come to life with larger-than-life video images. Its ever-changing artistic displays complement the nearby Art Institute. Millennium Park sits between Lake Michigan and Lakeshore Drive, which skirts the great lake along the city’s eastern border.

Navy Pier, One of the Best Things to Do in Chicago

About two miles north of Millennium Park is Navy Pier — a bit of a walk for most but easily reachable by bike, bus, or car. Off Lakeshore Drive, the entrance to the 3,300-foot pier is surrounded by more parkland and greenspace. Extending into Lake Michigan, Navy Pier offers things the whole family can enjoy. Besides restaurants like Harry Caray’s Tavern and Margaritaville, there is a giant Ferris wheel, various rides, and a funhouse. 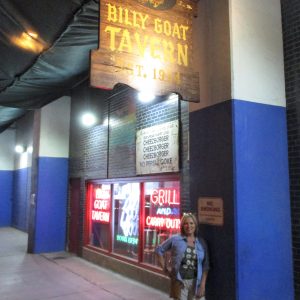 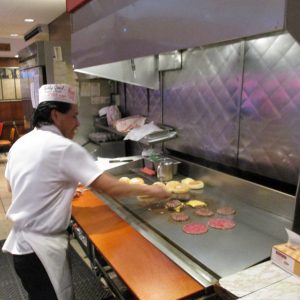 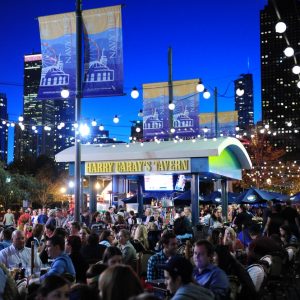 There is an observation deck at the end of the pier and various lake and river cruises, with the latter taking you into the city, along the Chicago River. The Billy Goat Tavern, a Chicago burger institution made famous on Saturday Night Live (think cheezborger, cheezborger, cheeps — no fries). Note: this is a franchise, the original location is downtown, off West Madison Avenue. Go there for the real deal.

From Navy Pier, follow the Lakefront Trail that goes under Lakeshore Drive and connects with the Chicago Riverwalk. Whereas there is a River Esplanade on the north side of the Chicago River, the Riverwalk follows the waterway’s southern edge. The scenic pathway, with towering skyscrapers on both sides, is below street level and takes you under an assortment of new and cool old city bridges.

You can easily spend a whole day walking or cruising along the Riverwalk if you’re looking for things to do in Chicago. There are cruises from Navy Pier and water taxis that pick up and drop off at different stations along the waterway. As well as a concert area, there are several picnic spots, public washrooms, cafes, restaurants, brewpubs, and even a winery to check out. The Riverwalk dissects downtown, where countless stores and eateries can be reached by taking the stairs up to street level. 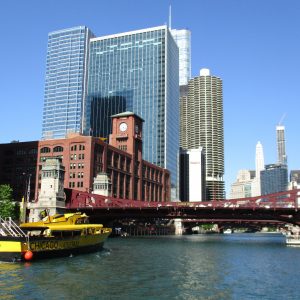 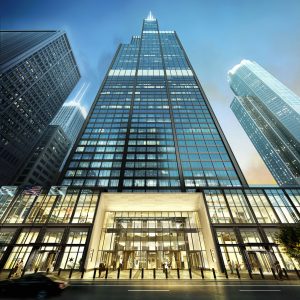 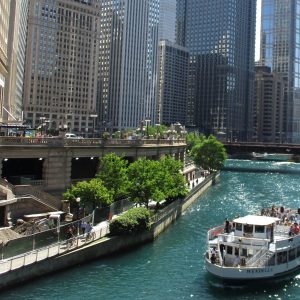 The Chicago River is the only river in the world that flows in the wrong direction — a man-made feature to bring fresh lake water into the city. Due to the clay bottom, the water is a lovely blue-green color. It’s also dyed green for St. Patrick’s Day every year. The Riverwalk offers great views of buildings like the Willis Tower (former Sears Tower — once the tallest in the US) with its glass sky deck and Marina City.

Sports fans will love Chicago for its professional sports teams. Hockey has the Blackhawks, basketball the Bulls, football the Bears, and there are two teams for baseball — the White Sox of the American League and Cubs of the National League. The Cubs’ Wrigley Field is a national historic landmark and one of the last remaining century-old open-air ballparks. If you’re looking for things to do in Chicago, don’t miss this one.

It’s been said that Chicago is one of the most easily walkable big cities in the US. However, if your feet can’t handle the action, jump on the L, Chicago’s historic elevated mass transit system that crisscrosses the city, running on steel stilts above city streets. Each time we’ve visited Chicago we stayed downtown for ease of access to the L for major sites and things to do.

On our last visit, we chose the historic Congress Plaza Hotel on Michigan Avenue. Opened in 1893 as a world-class hotel, this place catered to famous folks from around the globe. While waiting to check in, a friendly hotel security guard took us on a tour. He showed us the beautiful grand ballroom and a secret outer room where Al Capone played cards. 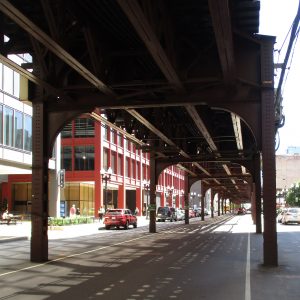 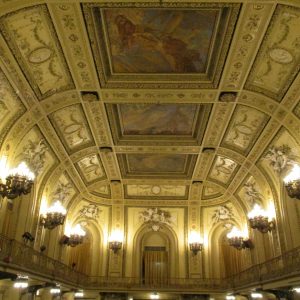 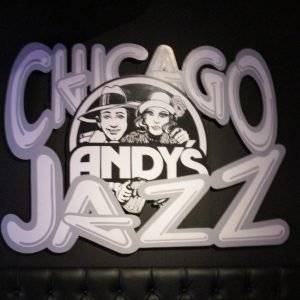 Just around the corner, we found one of the notorious gangster’s watering holes, the Exchequer Restaurant & Pub, on South Wabash. It’s a four-minute walk from the Art Institute of Chicago. The Magnificent Mile, a high-end shopping area, runs along Michigan Avenue, north of the river. If you visit the city in summer there are numerous music events, like Blues and Jazz festivals, held in Millennium Park. We took in the Jazz Fest on a previous visit. On our last trip, we dined at Andy’s Jazz Club & Restaurant. The meal was delicious and at one point our waiter excused himself to take the stage and sing.

If the weather is sketchy and you’re in need of indoor activities there is the Shedd Aquarium, Lincoln Park Zoo, Chicago Children’s Museum, and Field Museum. There’s the Chicago Theatre and Lyric Opera, or pamper yourself at the AIRE Ancient Baths. Even Chicago’s historic Union Station — the film location for countless movies — is something to see.

Eating and trying regional specialties is one of our favorite things to do when Cathryn and I travel. Chicago offers traditional American cuisine but there are neighborhoods like Greektown and Chinatown that offer their own fare. Some folks rave about Chicago-style pizza, but we prefer our own Italian-influenced pie from home, in Windsor. You definitely have to try the burgers and experience the ambiance at the original Billy Goat Tavern.

Our last trip to the Windy City was for our journey along the historic Route 66, with its official starting point in downtown Chicago at the edge of Lake Michigan. To set the mood for our cross-country journey to Santa Monica, we had breakfast at Lou Mitchell’s Restaurant & Bakery, circa 1923, where they give out donut holes and Milk Duds after your meal. 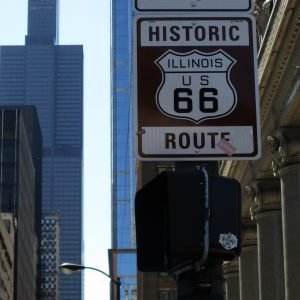 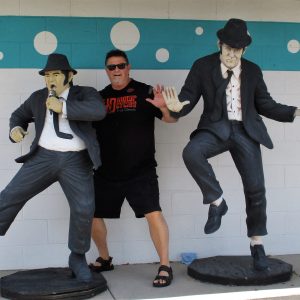 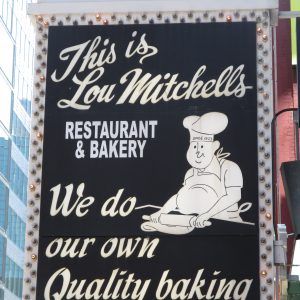 Celebrities from around the world have dined at Lou’s and it’s still a favorite for many locals. During our visit, I got to ogle members of the Chicago Police intelligence unit, decked out in their crested and matching black golf shirts. The team has been immortalized by the television show, Chicago P.D.

Between Cathryn and I, we’ve been to Chicago several times. The city has been fun to visit each and every time. There is no doubt in my mind that we will go back again to discover more things to do in Chicago. 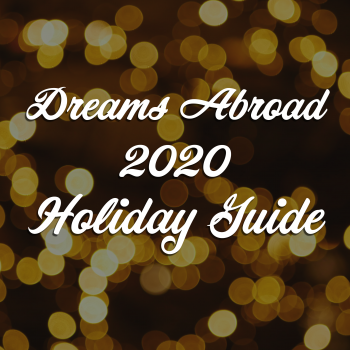 December 17, 2020
By Dreams Abroad Amidst a year like no other, we’ve all found new ways to bring people together, even when…
Read More 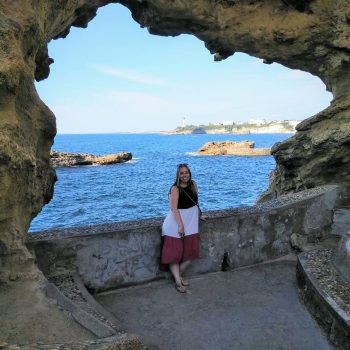 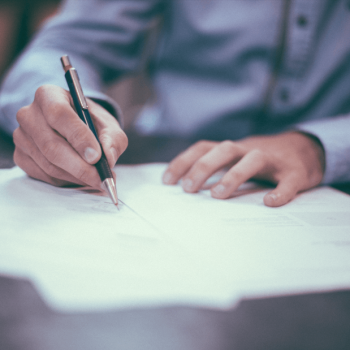 First Day of an Internship in Madrid

July 25, 2016
by Hisham Tammam First Day of an Internship in Madrid was interesting, to say the least. Obviously, I wanted to…
Read More