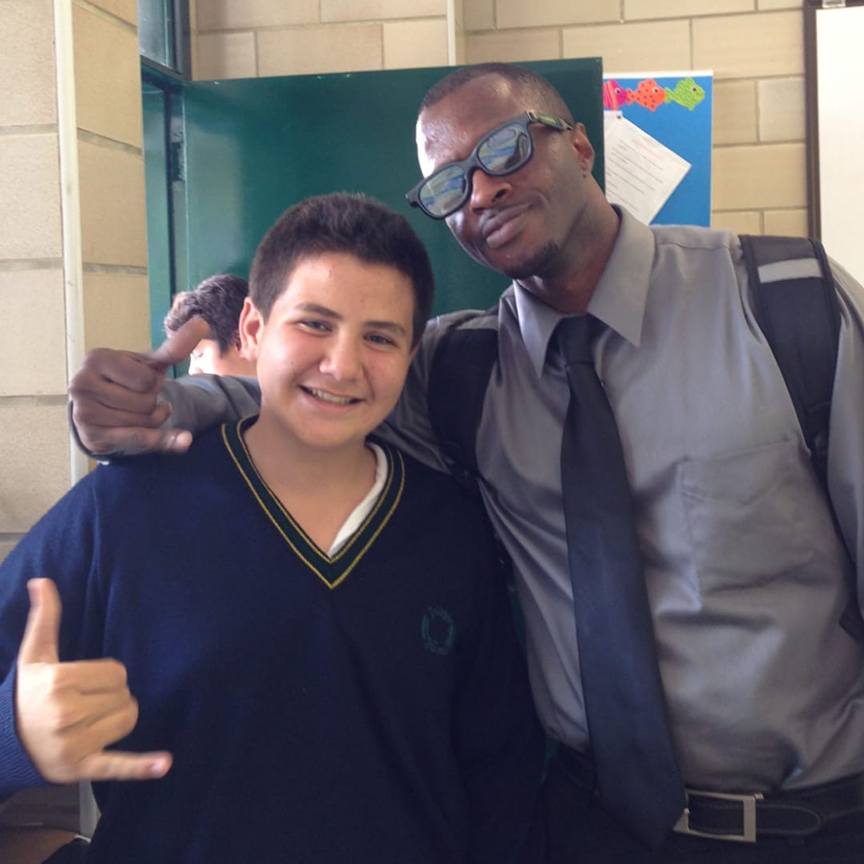 Leesa and Lamon met while he was teaching at a university in Medellin, Colombia in 2015 while Leesa studied Spanish over the summer. The Spanish language coordinator at the time, Juan, introduced Leesa to Lamon. Juan worked directly with Lamon and Leesa, but at different times over the course of their studies at the university in Medellin, Colombia. Leesa attended one of Lamon’s classes while he was teaching at the university and thanks Juan to this day for this great connection.

Lamon describes his Spanish studies, English language teaching, and how he started out as an expat living in Colombia.

How did you learn Spanish after you stopped working at the Catholic school?

“After I finished at the Catholic school, I applied for and was awarded the Beca Cultura scholarship at EAFIT University. Essentially, the scholarship allowed recipients to receive language classes at no monetary cost in exchange for facilitating lectures about the culture of your home country. The scholarship was a six-month commitment with the option to extend it for an additional six months. The majority of my lectures were related to popular holidays in the United States, sports, and music.”

When did you start teaching at EAFIT University? How did the opportunity arise?

“I started teaching at EAFIT University in Medellin, Colombia after I completed my six-month commitment to the scholarship program. During my lectures, the language department observed my ability to present and manage a classroom. This ultimately led to a job offer.”

What was your best memory while studying at EAFIT?

“One of my best memories at EAFIT was during a Spanish class with language learners from all over the world: China, Japan, France, and Russia, if I remember correctly. It was a great experience because not one learner spoke the native language of the others, but we could all communicate in Spanish. I remember stopping for a moment to absorb what was occurring at the moment and feeling thrilled.”

Did you use the same method of teaching at EAFIT that you used at the Catholic school? Why or why not?

“Yes, I used the same method. When I started teaching at EAFIT, I realized from the first day that the university heavily supported and preferred the incorporation of technology and group activities. For me, it provided a great sense of relief and appreciation. As mentioned previously, creative methods of teaching were not well-tolerated when I taught at the Catholic high school.”

What was an important lesson you learned from working there?

“Don’t repeat words you don’t really understand! When I taught at the high school, my students gave me the nickname of Lamonda. At the time, I didn’t really know what it meant; I just assumed it was cool and perhaps the Spanish equivalent of my name, Lamon. For the next six months and even when I started teaching at EAFIT, I often introduced myself as Lamonda, and locals would always laugh. I assumed it was because my name was different.

During a staff meeting with about 50 other teachers, I introduced myself as Lamonda. A dead silence punctuated with a few laughs. Later that day, a co-worker asked me if I knew the origin or meaning of the word and I responded by saying it was my Colombian nickname. Right then and there, after introducing myself to an entire room of all my co-workers as Lamonda, I learned that it means a big penis. So yes… for more than six months, I walked around Colombia introducing myself as a big penis and had no idea… Lesson learned.”

How long did you work at the university in Medellin, Colombia and why did you stop?

“I worked at EAFIT for five consecutive years. After my fifth year, I wanted to have more free time and flexibility to travel to the States to spend more time with my family. Teaching at EAFIT had many perks, but it also required a certain level of commitment to the university and my students. I didn’t have the option to move freely when I desired, which became a problem for me after five years.”

What did you do for fun while you worked for the university in Medellin, Colombia? 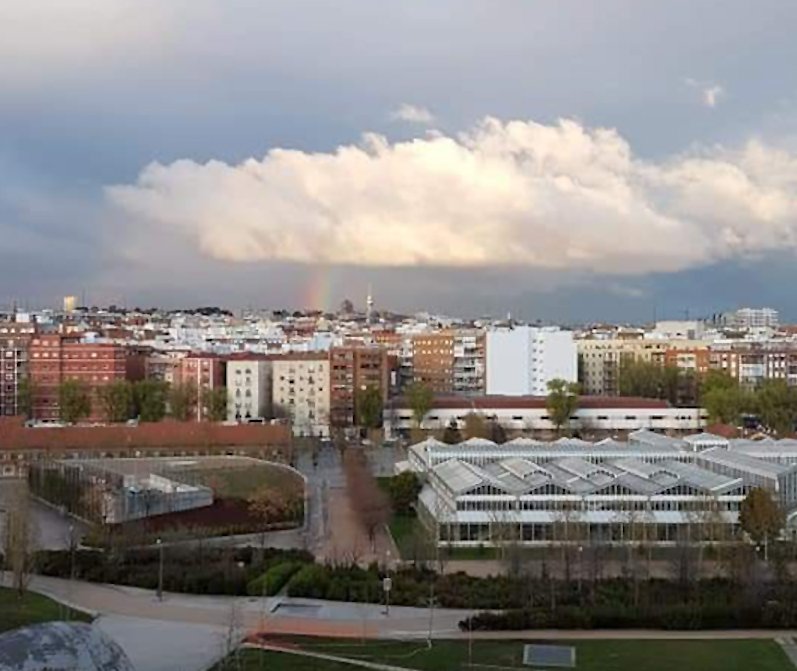 “Salsa. During my first two years, I didn’t enjoy or want to listen to salsa music. As I immersed myself more and more into the culture, I learned to appreciate salsa and became a pretty good dancer. When I wasn’t working, I tried to find time to dance or take lessons to learn new steps and embrace my new-found passion.”

What tips would you give to someone who wants to move to Medellin, Colombia?

“Learn the language… even at a basic level. It will open up so many opportunities to meet new people and experience the culture.”

How did you prepare for your new life in Colombia?

“Three months prior to moving to Colombia, I committed to studying for two hours Monday through Friday; one hour in the morning, and one in the early evening. My morning started off with 30 minutes of listening to and repeating Pimsleur audio lessons. After, I would read about current events out loud and write down new vocabulary. In the evening, I would review the new vocabulary and write a sentence for each new word. My evenings concluded with practicing verb conjugations. On Saturdays, I would try to do something fun like watching a movie in Spanish or attend a language exchange event posted on Meetup.”

What did you do to adapt in your first six months?

“During my first six months in Medellin, I focused on functional/survival Spanish: How to order food; How to ask for directions; How to ask for my change back from a taxi; etc. During my first six months, I didn’t see an immediate need to learn vocabulary across the board, but rather an immediate need to learn how to survive in Spanish. I often walked around with a small pocket notebook and would listen for keywords that seemed to be important.”

How about after that?

“After six months, I had a really good foundation in survival Spanish but was not yet conversational. I started thinking about topics that I wanted to practice and would talk to as many people as I could about the same topic. For example, if I took a taxi with five different drivers, I would bring up the selected topic with each driver; or, I would sit in the park and talk to locals. Hint: Colombians love to talk.

Talk to other expats! Speak to credible sources that live or have spent a sufficient amount of time in Colombia. If you don’t have a contact, there are plenty of groups on Facebook with experienced expats. Be sure to speak to multiple sources as everyone has a different experience and perspective of Colombia. AVOID OR BE CAUTIOUS WITH MISLEADING INFORMATION!”

How much did you miss the United States?

“One mistake that I made early on was comparing Colombia to the United States; don’t do it. You will become miserable. When you make the move, it’s important to understand that both cultures are completely different. For example, in Colombia, things move a bit slower than in the United States. Going to the bank to make a deposit may require an entire day’s commitment versus the 15 minutes in the States; or, adjusting to putting toilet paper in a garbage pail versus in the toilet. Things may require some time to adapt to. Be patient with yourself.”

Why did you leave Medellin after five consecutive years of living there?

After living five years straight in Medellin, I felt that I had completed everything that I wanted to complete. My Spanish level had increased from A1 to C1. I had experienced life in another country and I had received a Grammy Nomination. Taking all those achievements into account and wanting to spend more time with my family, I decided it was time to leave and think about the next chapter in my life.”

Wrap Up – Teaching at a University in Medellin, Colombia

Lamon and I spoke during the first weekend of May, 2020. He was speaking to me from a finca in Envigado. I said: “Lamon, what is a finca?” After I Googled “finca Medellin,” we both agreed that I need to go back to Colombia to experience a finca. I hadn’t been there long enough. In 2015, I was working on finishing a master’s and didn’t explore Colombia as Lamon has described it.

Speaking of long enough, Lamon arrived in Medellin on February 25, 2020, and didn’t realize he would not be able to fly back to the US after his Primeros Cinco event. Lamon had planned to fly to Colombia for his quarterly event and return back to the US per his usual routine. This time, he got stuck when the Colombian government restricted all flights coming in and out of Colombia due to COVID-19.

Lamon is not sure how much longer he will be at the finca but he knows it will be at least until June 1, 2020. He is excited to announce that on May 16, 2020, his debut single Spotlight will be released. It can be found on Apple Music, Amazon, and Spotify. Be sure to check it out and find Lamon on his social media to send him your feedback. Catch up with Lamon Chapman’s first interview. 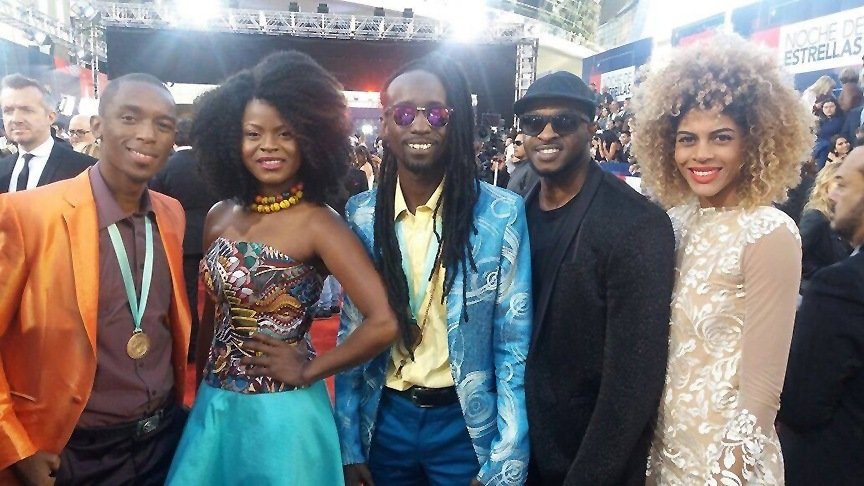 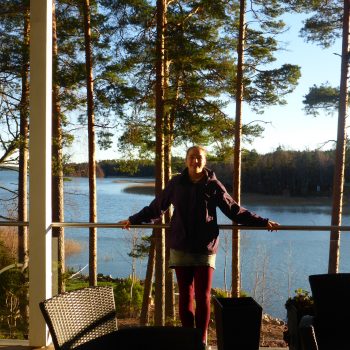