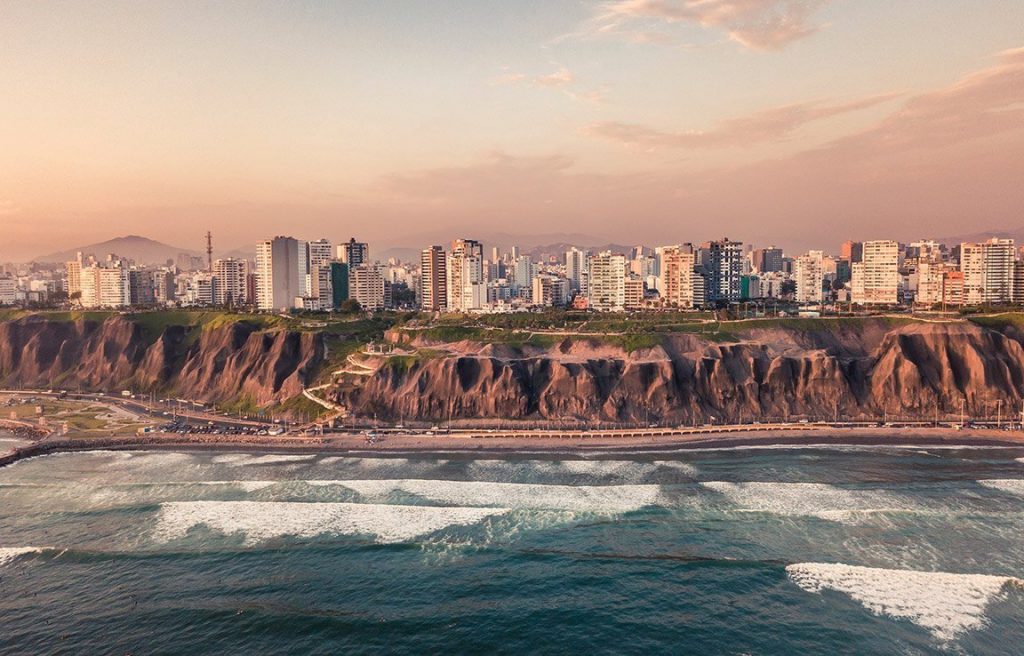 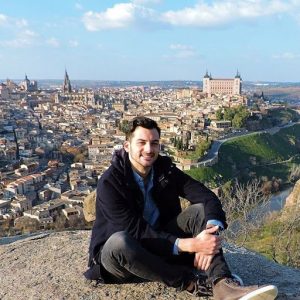 After living in Spain for two years and covering some serious ground in Europe, I began to gaze my eyes south of the equator to see what new adventures I could get myself into. I had many options to choose from like Colombia, Brazil, and Argentina. However, with it being winter down there, I wouldn’t have been able to enjoy the beach life as much as I would have liked. I ultimately found Peru as the most practical choice. I knew it would be a rigorous trip and since I’m not getting any younger, I decided to pull the trigger on a round-trip ticket to Lima on Spirit Airlines for roughly $600. There were cheaper flights on Latam Airlines but their reviews online were abysmal, so I took the less risky option. This is part one of a four-part series.

I landed in Lima around midnight extremely groggy from my 14-hour journey and attempted to make my way towards the exit without a real clear idea of how I was going to get to my hostel. Thankfully, I didn’t need to think too much because there were about six or seven taxi companies intently flagging me down. I ended up paying 60 soles for a ride to Miraflores, which isn’t terrible. However, I would later find out that there is an airport shuttle that costs between 8 and 15 soles, so keep this in mind if you’re flying into Lima. And at the end of my trip, I would come to discover that Uber’s prices are almost half of the taxi rates. You live and learn, I suppose. I arrived at Hostel Puriwasi, checked in, and promptly went straight to sleep. 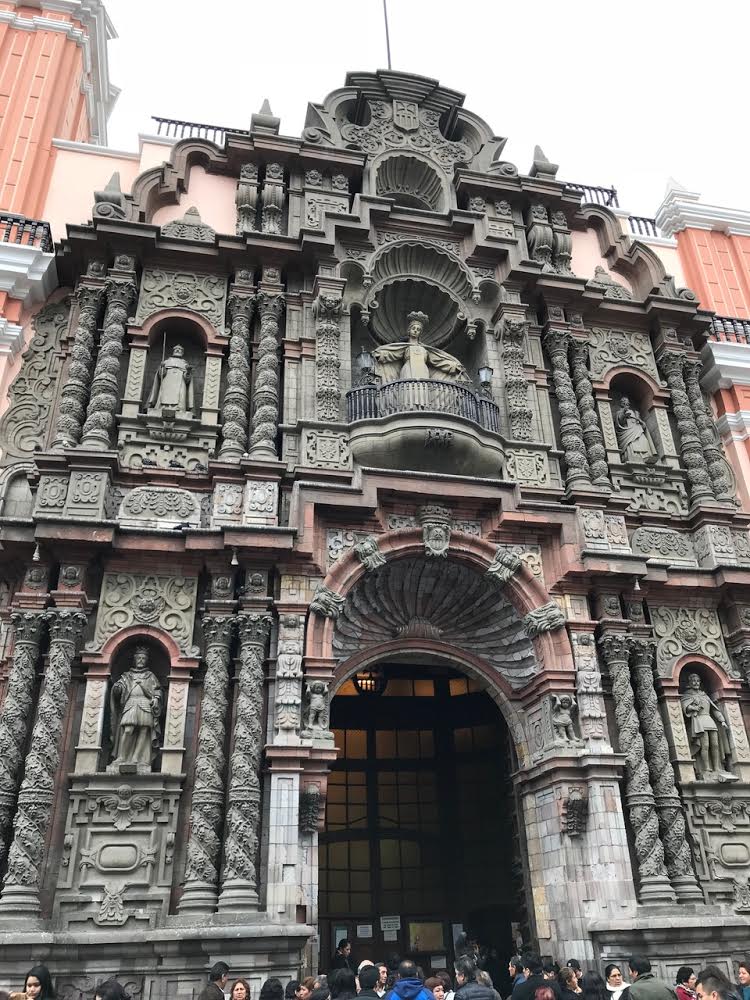 A Tour Around Downtown Lima

Six hours later, I was up and ready to see what Lima had to offer. I signed myself up for a free walking tour of downtown Lima, which was run by my hostel. Just like that, my vacation was underway. We took the metro (which was actually an extended bus) and headed for the city center. Passing through various neighborhoods, we even went under the national soccer stadium. Our stop was Jirón de la Unión, one of Lima’s oldest and most bustling streets. The street used to be an aristocratic hotspot for many decades after its construction in the 16thcentury. The street’s age was evident by the European-style architecture that shadowed the walkways. Today, it’s a very popular destination for shopping as it’s littered with high-end department stores and upscale restaurants. 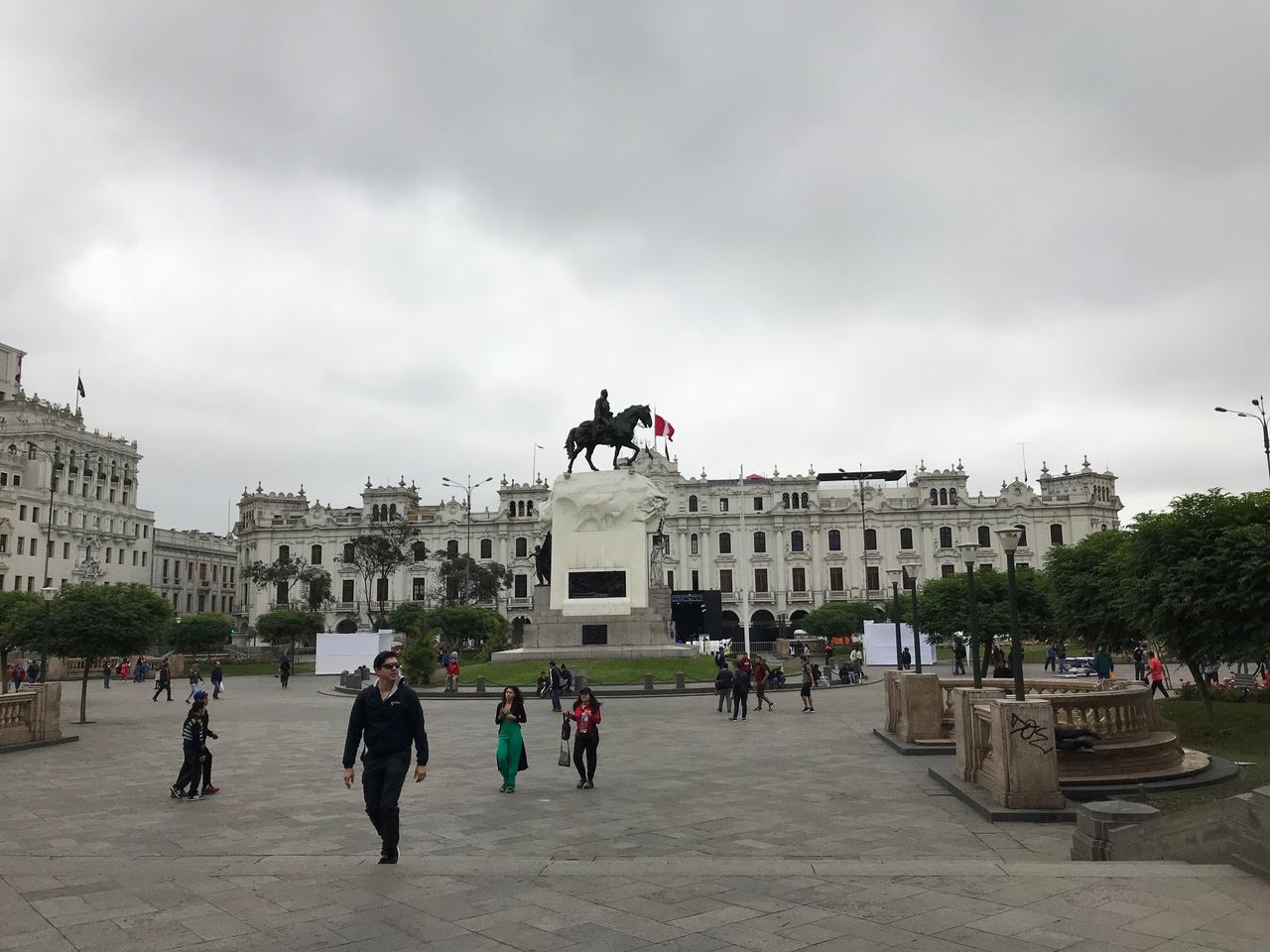 We took a short walk to Plaza San Martin, a beautiful and relaxing square in the heart of historic Lima. Then, we shot back up Jirón de la Unión towards Plaza Mayor. Along the way, we passed La Iglesia de La Merced, a gorgeous, intricately-designed church built by the Spanish in the early 1500s. We detoured a little bit to see the Basilica of San Francisco(more on this later) before reaching the Governor’s Palace. Thankfully, we happened to enter the grounds at a great time. The Dragoons of the Presidential Guard were performing their ceremonial changing of the guard. We all watched in awe (tourists and Peruvians alike) as the guards, mounted on horseback, carried out the traditional performance across the palace’s front yard. The governor stood tall on the front steps, watching, as they marched to the tune of the military band. 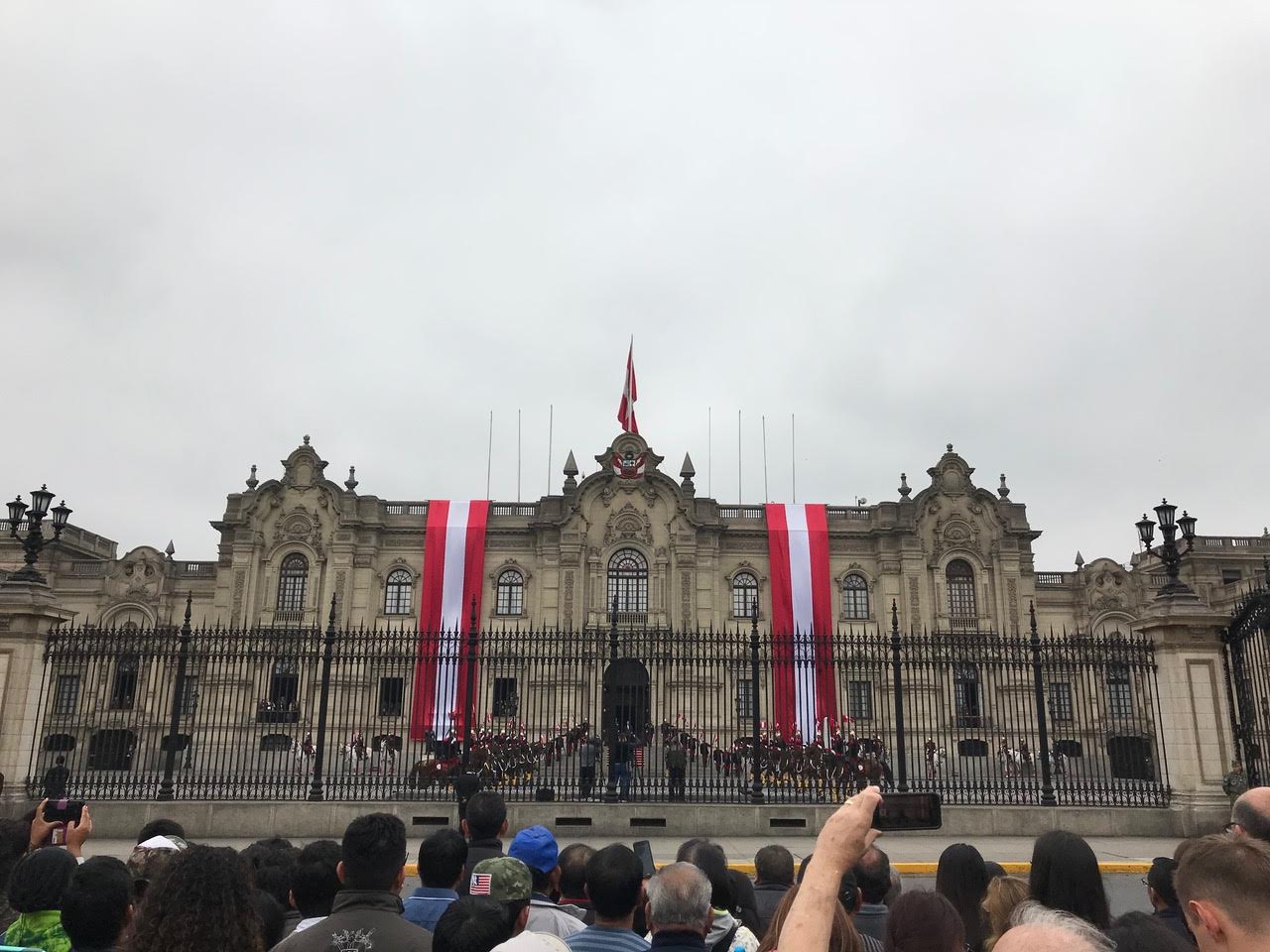 Shortly after it ended, and one street churro later, our guide, Franco, took us through the back streets of historic Lima. He showed us old Spanish balconies, where women used to hang out together while men romantically serenaded them on the streets below (by singing or playing guitar). Franco tried to get some of us guys in the group to show off our flattering moves, but none of us were brave enough. As if any of us foreigners could come close to that Hispanic charm! We carried on, almost nearing the end of our tour. 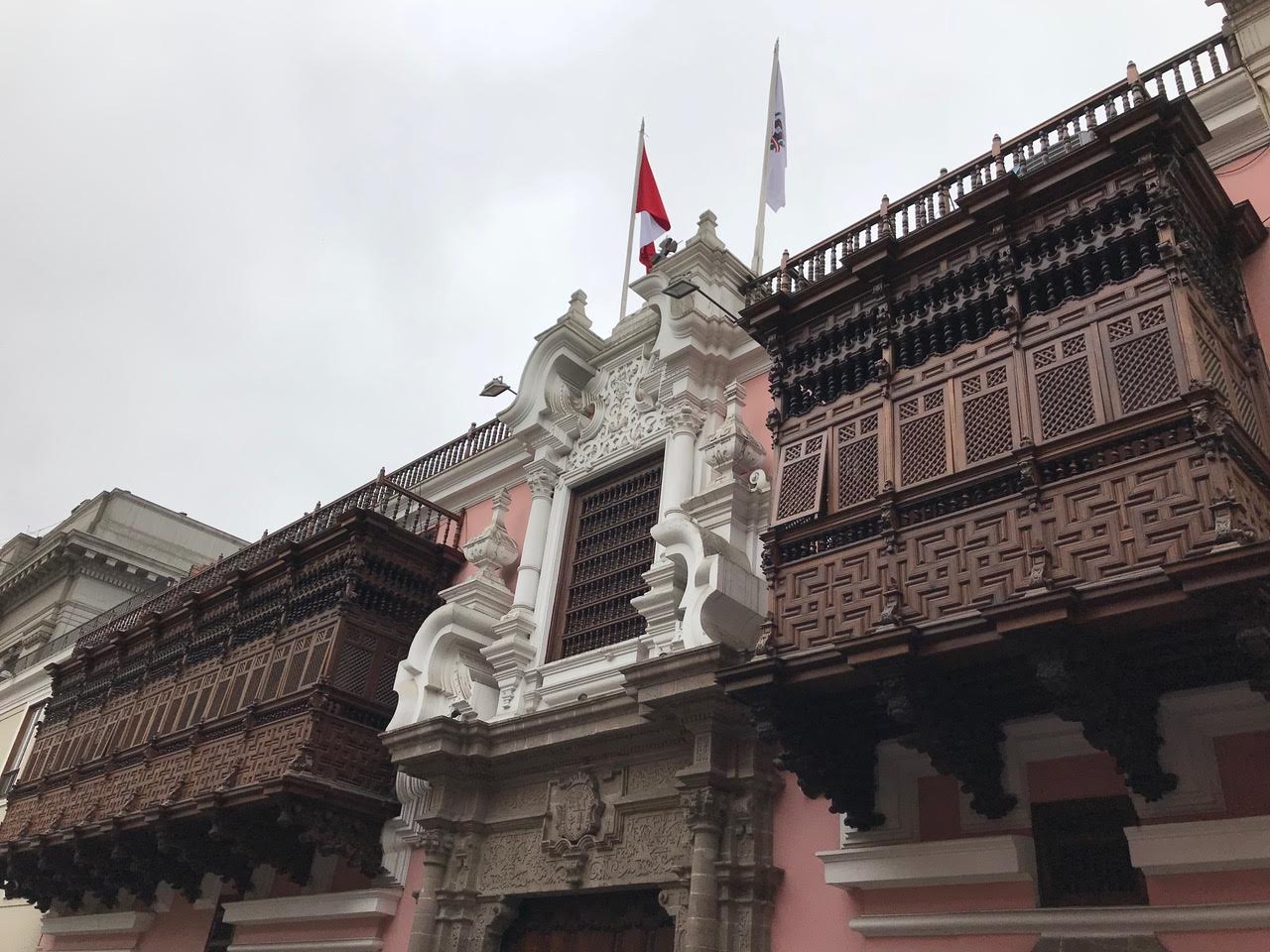 Heading to the north of downtown, we passed through a series of small streets. They weren’t particularly crowded but they definitely had their share of the local Limeños going about their day. There were also Andean families selling handmade jewelry, clothing, and locally grown cocoa leaves. I had been keeping my eye out for cocoa leaves the entire day. I didn’t know how I would react to Cusco’s altitude later on in my trip, so I picked up a large baggy of them along with some cocoa candies. Franco encouraged us to buy some other stuff from the Andean people. Every single day they travel close to a 100 miles down from the mountains to sell their goods in those very streets. I couldn’t imagine how hard of a life that must be. However, you would never know their struggle with their smiling faces and tranquil demeanor. It was definitely an interaction I’ll never forget.

The tour ended in a vibrant neighborhood full of musicians and street vendors. There was a great view of the Andes Mountains in the distance and some of the favelas in the nearby hills. After a group selfie (which I can’t find anywhere!), we all went our separate ways. Two others and I decided that we had to sample some authentic Peruvian food, so we set out to find a decent establishment in the area. We came across a small restaurant with a rowdy crowd watching a World Cup soccer game. We snuck in, grabbed a table, and ordered some Pisco Sours along with our main dishes. Pisco is a traditional Peruvian spirit made from fermented grape juice. It’s kind of like wine, but with a much higher alcohol content. It tastes a lot better than it sounds, I promise. 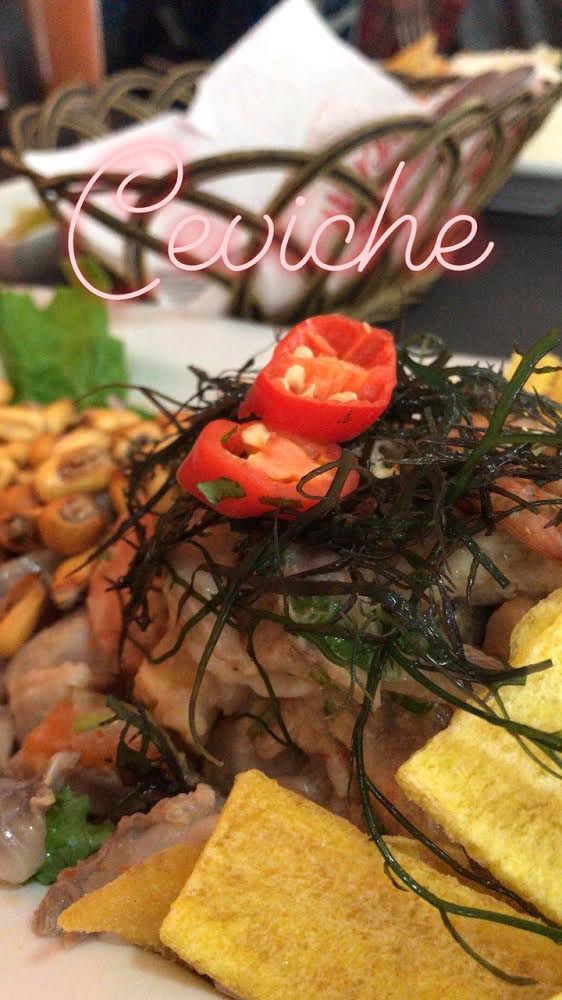 Our food arrived at the table and I feasted on my wonderful ceviche, a spicy dish of raw seafood seasoned with citric juices, onions, chili peppers, and cilantro. My plate also came with roasted corn and potatoes. Interestingly, my body has a great way of showing how delicious a dish is, and that’s by how much my nose runs. And let me tell you what, that thing didn’t stop leaking. It was probably from all the spice but either way, I was in food heaven.

Now stuffed like Peruvian guinea pigs, we decided to go back to the Basilica of San Francisco. Why, you ask? Because it has ancient catacombs, of course. Not as big as the ones in Paris, but still a sight worth seeing (even with the existential crisis it brings). It’s estimated that there were around 70,000 people buried there, their bones scattered in geometrical shapes. The catacombs have even survived the multitude of earthquakes that have devastated Lima over its 500+ year history. The basilica itself was very impressive as well. The interior, with its stone walls and large paintings, reminded me of those I had visited in Spain. Probably because it was built by the Spanish. But still, it made me miss my second home.

The afternoon was winding down to an end. The tour had been a lot longer than expected. In a good way, of course. My new friends and I headed back to the hostel to refresh and hang out at the rooftop bar. With a newfound love for pisco sours, we ordered a round and chatted about our travels and life in general. Sarah, a French girl traveling indefinitely around South America, turned out to have the same flight as me to Cusco. So, we agreed to meet up the next day in order to split a taxi ride to the airport. After an enjoyable few hours, we all eventually called it a night. We all had early mornings the next day. Up next was Cusco. 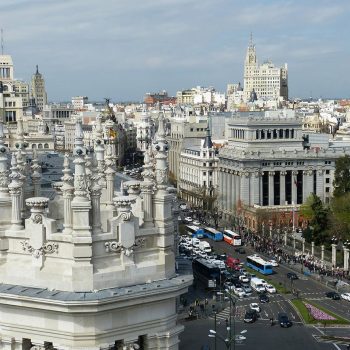 December 17, 2019
Upon reading my placement letter from the Valencian Community, I noticed it was odd. I assumed I was reading a…
Read More 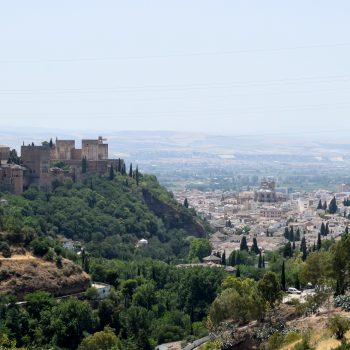 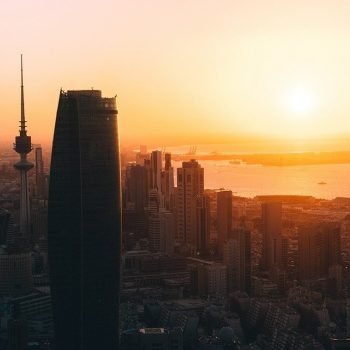 May 30, 2019
by Dalal Boland Despite the fact that Kuwait is a small country, Kuwait has some of the most dazzling places…
Read More